Here on the internet, we are prone to cynicism, snark, and general outrage at the world we see around us. Sometimes that’s in direct conflict with the world of sports, which should be about wish fulfillment, entertainment, and the mix of beauty and brutality of athletic pursuits. Sometimes that direct conflict is because of sports. The fact is, social media has made us a more immediately negative place.

So, without any snark, let’s start out the season with what I think is a healthy exercise: 28 things that I like to varying degrees about hockey.

1. I like hockey. I like its beauty, its physicality, and the endless struggle to combine both into something that makes us all insane. I like it’s individualism and it’s team spirit. I like that hockey players shouldn’t be forced to choose between team and self, that they can be one and the same.

2. I like that this sport almost exclusively caters to and attracts the insane. It’s a sport full of crazy giant monsters on skates killing each other to try and lift an age-old trophy that they don’t even get to keep. Obviously the people who follow and adore and love and hate the people who would take up such a pursuit are nuts.

3. I like that we’re still a ways away from the next lockout.

4. I like that almost every night, a team can come into your local building, and you can say “______ and the _____s” are in town, and that will mean something. Sidney Crosby and the Penguins, Jamie Benn and the Stars, Jonathan Toews and Patrick Kane and the Blackhawks… all the way down to the young guns of the Oilers, Johnny Hockey and the Flames and Shane Doan and the Coyotes.

5. I like that I cover hockey, and I like that even if it has little affect on how I feel about the games, when I go to the rink, 90% of the people that I meet will be nice people that I’d want to have a drink with if we weren’t all wasting our lives chasing this sport. (I also like that pretty much every sport is this way.). I also like the community hockey has brought me, and the tons of friends I’ve made because we share this silly thing as a passion.

6. I like the analytics people. I like that they’re putting something on display that I have to learn and make an effort to get to know, and that it’s something that will make me feel like I know a little bit more about the game. I like that it caters to my inner obsessive, the person who finds something they like and wants to immediately know every damn thing about it, Harriet the Spy-style. I like that teams are recognizing their efforts and trying to use their methods to win in addition to the things they’re already doing.

7. I like that hockey Twitter exists, even if it bugs me sometimes, because I know 100 people who will be on my side when Mike Milbury tries to take Alex Ovechkin down a peg.

8. I like that Jaromir Jagr trudges on, not with the legs he had at 22, but the creative flare he had at 22 and 32, and the mind at 42 to know how to deploy it. I like that covering hockey has introduced me to what a thoughtful, hilarious human being he is. I like that I think his team will be a playoff team, and we won’t have to suffer the indignity of the great Jagr not in the postseason for the second time in his NHL career.

9. That said, I still like that I can hate-respect him for his performance against the Devils in the Eastern Conference Quarterfinals in 1999.

10. I like that Bob Cole is kind of hockey announcing’s answer to Jagr. The speed isn’t there, but his knowledge of the moment and how to make something beautiful happen within it remain.

11. I like that Mike Emrick — the first truly definitive American voice of hockey — is still doing it. That he still attempts, with all his vocal might, to 100% capture hockey’s always reigning chaos.

13. When I think about it, I like PK Subban and pretty much everything about him. I like the textbook skill, offensive power and gambler’s instincts he brings to the Canadiens, and I like the personality and honesty he brings our sport. For fans who always complain about how they want to relate to their athletes, no one is living life as a hockey player the way I would want to the way PK Subban does.

… and most recently, this one

15. I like the Canadians who have claimed this game as their own, who believe they love it more than anyone loves anything.

16. I like the Americans who see hockey as almost a kind of counter-culture in their country and think… no, we do.

18. I like that maybe, just maybe, this is the year that the New York Islanders are finally on their way to being a consistently great team. I like that their fellow native Long Islanders will get the chance to be the hipsters who liked the team before it was trendy when they move to Brooklyn.

19. I like that we get to wonder, when April and May come around, if we’ll ever see another hockey series quite like the one the Kings and the Blackhawks played last May.

21. I like that, for the teams that will not be so much fun to watch this year, there are two players (Connor McDavid and Jack Eichel) that we’ll all fiercely debate over, and get to put into alternate universes forever, wondering what could’ve been on either side.

22. I like that we all, collectively, like the Dallas Stars. I guarantee that they will be almost everyone’s side-team.

23. I like that, despite their messy offseason, the San Jose Sharks are still a team capable of making sure I never have to see Joe Thornton make this face ever again. 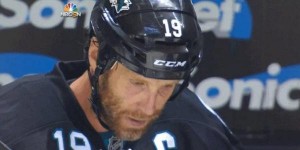 24. I also kinda like that we’ll all still wonder what really will happen if Jumbo Joe ever scores four in a game.

25. I like that the Los Angeles Kings have a legitimate chance to defend Lord Stanley’s Cup, and I like that they’re growing the game in Southern California in a way even the great Gretzky never could. No one would argue that the Kings play the game with as much flare as #99 did, but I grew up in New Jersey in the mid-90s, so believe me when I say that I know the people who’ve picked up the game out in LA do… not… care.

26. I like that I think their bitter California rivals, and particularly the Anaheim Ducks, will challenge them for Pacific supremacy this year. And that whomever that is has to go through whomever masters a division with the Blackhawks and Blues in it.

27. I like that the Tampa Bay Lightning are my pick to win the Stanley Cup, because they’re what should be any true hockey fan’s dream: a true superstar who defies logic with his abilities in Steven Stamkos; a quirky goaltender who towers above almost everybody with his high and most with his skill; a couple of charming, entertaining Swedes (Victor Hedman, Mattias Ohlund) on the back line, including one (Anton Stralman) who personifies the underdog everyone gave up on made good; veterans you’d love to see get that one last shot at glory (Brenden Morrow); and players who are throwbacks to the sport’s Canadian roots, even if they are American (Ryan Callahan, Brian Boyle).

28. I like that for the next nine months, there’s nothing else. For the diehards who are stupid about this stuff to the point where it’s taken years off your life, that we’re all willing to do it again. Because it’s just another clean sheet, waiting.

Steve Lepore is a writer for Bloguin and a correspondent for SiriusXM NHL Network Radio.