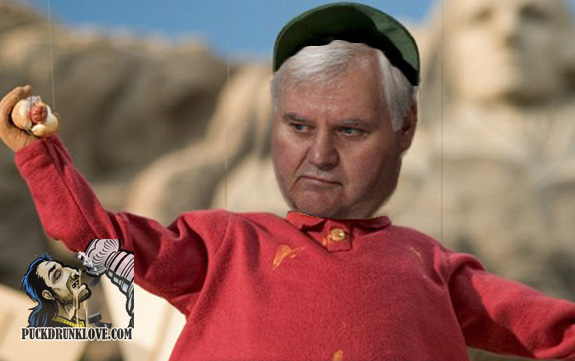 Ken Hitchock, I’d like to introduce you to the the City of St. Louis.

In case you haven’t heard the news, the St. Louis Blues fired head coach Davis Payne on Sunday; replacing him with one of Outback Steakhouse’s most illustrious clients.

Under Payne’s watch, his young Blues team failed to live up to some increased expectations and sputtered to a 6-7-0 start to the season.

How bad have things been for the Blues?

Their best player has been Brian Elliott. I’ll just wait and let that thought marinate with you for a minute.

Yes, their best player has been Brian Elliott — a goaltender who entered the season without any NHL job certainty whatsoever. He is the same man who is often the butt of many Bruce Garrioch’s Twitter jokes. He is a goaltender who is with his third organization in less than one year. If you asked any Senators or Avalanche fan to say anything nice about his play, you would have to twist our arms to get us to say that his only redeeming on-ice quality was the inclusion of Casey Jones on his mask.

The Blues power play is operating at a league worst 7.5-percent success rate and their 27th ranked penalty kill (73.8-percent success rate) isn’t faring much better. Jaroslav Halak, their prized offseason acquisition from 2010, is 1-6-0 with 3.35 GAA and a .857 SV%. It’s a far cry from the Montreal days when fans would hand out stop signs before playoff games, now fans are simply asking the Blues organization to stop putting Halak on the ice.

Enter Hitchcock – a man who hasn’t coached since 2010 but has an impressive 533-350-88-70 (.588 winning percentage) record that is highlighted by his 1999 Stanley Cup victory with the Dallas Stars. In other words, the Hitchcock hire passed the John Tortorella ‘winner’ smell test.

I tried to find a photograph of a happy Ken Hitchcock but ultimately failed. This will have to suffice.

It’s going to be an intriguing situation to watch unfold in St. Louis. This isn’t the hockey equivalent to Tony La Russa and the St. Louis Cardinals. The Blues still have a way to go before being mentioned in the same breath as some of the better teams in the Western Conference. Having developed a reputation for being a hard-assed coach who has a preference for his heavy reliance on veteran players, how is Hitchcock going to mold and develop one of the NHL’s youngest and most promising teams?

Personally, Hitchcock’s always struck me as a defensively inclined head coach who has a shorter shelf life than an open jar of mayonnaise that’s been left on a patio table all summer long. Thanks to his reputation for being a ‘win now’ result oriented kind of coach, it is going to be really interesting to see how Hitchcock balances the short-term goals with the organization’s efforts to develop its young players and achieve sustained success.

Hilariously enough, Tim Wharnsby from CBC tweeted that Hitch said he has 25 ex-players coaching in either junior or the college ranks. He spent a lot of the past 1 1/2 years mentoring this group.