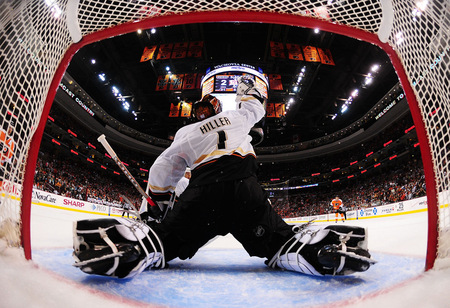 We have seen this act before. After a slow start to the season last year, the Anaheim Ducks caught fire in the second half and made an improbable run to the postseason. While they fell in the first round to the Predators, the league took notice of Randy Carlyle and the Ducks high-powered attack.

So when they stumbled out of the gate this year, no one should have been surprised. But a change was needed and Bruce Boudreau was brought in just days after he was dismissed from Washington.

Since the fiery Boudreau arrived in the land of Mickey Mouse, he has put together a record of 18-11-6, including 15-3-4 in 2012 – quite the record for a team that many left for dead after they started the season so miserably.

There were the Bobby Ryan trade rumors, then the word was that Getzlaf or Corey Perry could be had for the right price, but instead the Ducks stayed the course and let the team round into shape.

Anaheim has the luxury of not only having three star players in the prime of their career, but they also have the unique case of two players who were thought to be done with high level competitive puck, but have reinvigorated themselves in California. Koivu and Teemu are still playing at an elite level, and the team would not be where they are now if it were not for their consistent play.

But despite their hot play as of late, Anaheim finds themselves with a 25-24-10 record overall, and they are 13th in the Western Conference. The West is historically tight, and this year is no different. The battle for the final few playoff spots is as tight as ever, with seven teams with seven points for those final few spots.

Amongst the teams that the Ducks would have to leapfrog in order to make it to the second season are the Wild, Avalanche, Stars, Flames and the Kings. Aside from the Kings, none of these teams have an offensive attack that can operate at the high level that the Ducks do, so they are all well aware of who is lurking over their shoulder.

But enough about the Ducks scoring, they have also been surprisingly effective at keeping the puck out of the net as well. After struggling with a curious case of vertigo last season, Jonas Hiller is playing at a level that we have not seen him at in over a year. He went 7-2 with a 1.55 goals against in January, and has continued the hot play with a 6-1 record and a 2.03 GAA this month.

You can have all of the firepower that you want, but when Hiller was 5-12 with a 3.42 goals against in November and December, it was next to impossible for them to rattle off any consecutive wins. There was a time in the season when the Ducks looked like they were destined for the lottery, now they look like one of the most dangerous teams in the league.

While it has not all been roses for the Ducks this year, as stud blue liner Cam Fowler has taken his sophomore slump to heart and continues to struggles in his own end. But Lubomir Visnovsky is healthy once again and the highest scoring d-man in the league from just a year ago is playing at an elite level once again.

Three stud offensive dynamos? Check. Two players left for dead who are playing above their heads? Check. Goalie playing at an elite level? Check. Coach lighting a fire under the rear end of his players? Check.

The Ducks will make the playoffs and they could cause some damage once they get there.