Welcome to yet another edition of This Week in NHL Stupid. We track the ugly, the silly, and the plain ol’ stupid in the World of Hockey. This week, we celebrated the 500th goal from Patrick Marleau, all of which came with the San Jose Sharks.

Awesome. I’m sure the NHL paid tribute in an appropriate way … 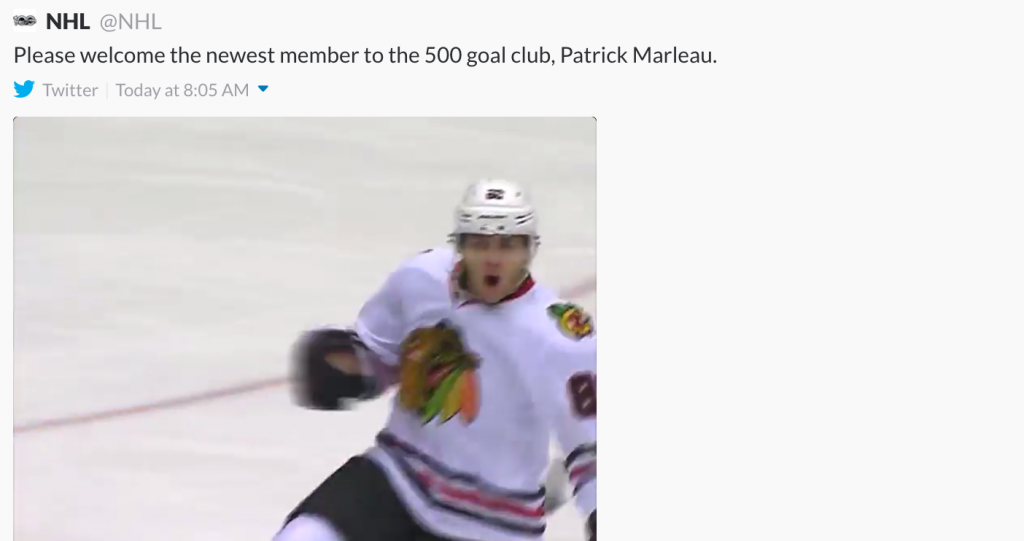 Maybe it was from the days where the Sharks used the Indian head as a third jersey?

Okay, I can’t explain it. But I thought that this would be the worst case of mistaken identity this week. FOX Sports Tennessee responded by saying: “Hold my beer” …

Who are these people and when did the Rangers trade for them? I thought they had no cap space!

For the record, that was Brady Skjei (as Brad Chase) to Chris Kreider (as Chris Kader) to Matt Zuccarello (as Matt Zerella). And also for the record, the poor lady who read those highlights probably took entirely too much blame for that, because a studio host in the Tennessee market doesn’t get paid to know the entire New York Rangers roster off the top of their head. There are writers and producers with access to the internet who need to help her with that. That was a team effort.

But it was also hilarious. And it was just as hilarious as the Stars mistaking their own net for the other one.

Jiri Hudler’s only hope is for whoever reading the highlights to mess up his name. Call him Jim Hudson or something.

Or how about the referee that mistook Siri for a goal judge:

Yup. A cell phone used during a 15 minute review to conclude that they couldn’t figure out what the heck they saw. I think Siri would have given them a quicker answer. (Though I’m not sure this is the best marketing for Apple.)

Well that’s all the stupid we have for this week. Until next time, say good night, Kris.