Welcome to another edition of “This Week in NHL Stupid”, where we track the silly, the ugly, and the stupid in the world of hockey. And while the week started out slow, eventually the stupid oozed out of the pores of the NHL this week. Let’s start with a team who hasn’t played a game yet.

Yup, the initial trademark request for the Vegas Golden Knights was denied. You know what’s funny … we get it ingrained in us as fans these days that sports organizations aren’t so much teams but businesses. “Why can’t you sign that big free agent to help us win the Cup?” “Hey … we’re a business.” So here come the Vegas Golden Knights, and all they’ve done is conduct business, and made business decisions. And they’ve already stumbled on the first one.

Now here’s the other stupid part: The US Patent & Trademark Office thought that there would be confusion between the logos of the Vegas Golden Knights and the Golden Knights of the College of Saint Rose. Ironically, there are thousands of people who now are aware of Saint Rose, her college, and her logo. A logo which frankly, looks nothing like the Vegas Golden Knights logo. But hey, now you have people scrutinizing both logos like it was that blue and black dress. (And yes, it was blue and black. I’ll fight you on it.) So I guess people are confused after all. You win, Patent & Trademark Office.

Then there was Taylor Hall’s hit on Philip Larsen on Tuesday, which rendered Larsen unconscious.

So let’s defend our teammate by stepping over him and on him to beat the tar out of Taylor Hall. Because that will solve the problem.

Two things: The obvious one being that trampling your unconscious teammate to get to Taylor Hall isn’t the best way to defend him. Second being: players have to stop going after guys in retaliation for clean hits. Guy gets his stick up or goes knee on knee or hits a guy into the boards from behind, have at it. Those are dangerous plays. Taylor Hall’s hit was clean. Larsen’s injury was unfortunate, but not the result of a dirty play. It’s only doubles the stupidity of clanking your teammate’s head as he lay on the ice to retaliate for a clean hit.

But I suppose it’s a lot to ask of NHL players in the heat of the moment to realize that a concussion is a big deal, especially when you have guys like Patrick Maroon responding to Connor McDavid being taken off the ice by a concussion spotter by saying that “this is a man’s game” I guess because women never get concussions, which is proven by science, right? Which you might have missed because you “play hockey and not school“.

I also want to mention the stupidity that is traffic in New York City. It caused the St. Louis Blues to cancel their morning skate at Barclays Center as they couldn’t get to the rink to practice because of traffic. Traffic is stupid, morning skates are stupid, and Islanders fans will tell you that hockey in Brooklyn is stupid. So the Blues hit the hat trick of stupid on Thursday before their 3-2 loss to the Isles, which was helped by a first period which made you wonder if the Blues made it on time for the game, let alone the practice.

Now speaking of that game, I attended it. And I saw something that I had to bring up, which will take place in a couple of weeks: 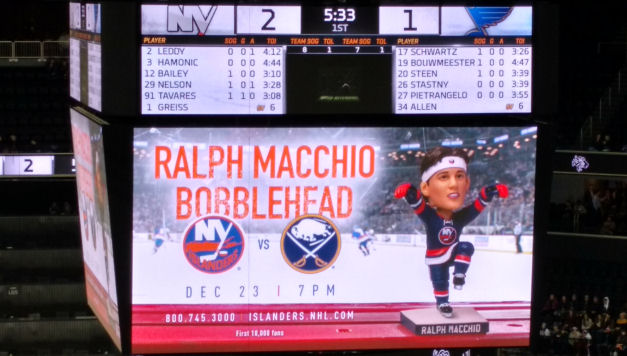 I hesitate to call this “stupid”. I mean, Macchio is obviously an Islanders fan. (He was at last night’s game.) And, I guess it’s cute. But it’s extremely weird. And Thomas Greiss can’t get a bobblehead while an actor synonymous with the eighties gets one? I wonder if Greiss thinks that’s stupid?

(Disclaimer: Thomas Greiss’ name was picked out of the air for dramatic effect. He probably doesn’t care about Ralph Macchio’s bobblehead. And Greiss, after all, does have a bobblehead from his days with the Worcester Sharks. But that was almost ten years ago. He deserves another one.)