Welcome to a very special holiday edition of “This Week in NHL Stupid”, where we track the silly, the ugly and the stupidity in the world of hockey. Now it’s a holiday edition because we’re willing to bet that you, dear reader, went out and got some hockey themed Christmas or Hanukkah gifts for somebody very special. Maybe you’re a Florida Panthers fan or perhaps just a Jaromir Jagr fan who wanted to commemorate Jagr’s great career, which has been highlighted yet again with him passing Mark Messier for second on the all-time points scoring list.

Well the Florida Panthers, no dummies when it comes to marketing and capitalizing on an opportunity, had a shirt ready to go so that you can get some last minute gift shopping in. Behold, the “Jaromir Jagr Legend Status” shirt: 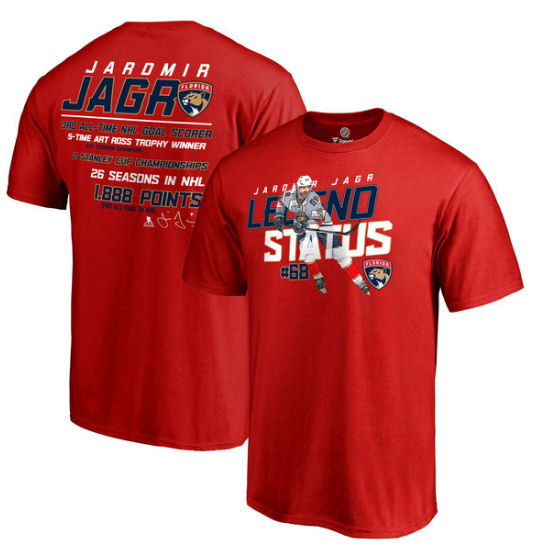 Hey that’s pretty sweet! I would buy that shirt for the Jaromir Jagr fan in my life.

Wow, 26 seasons in the NHL? It’s mind boggling, isn’t it? Especially when you look at all of the comparisons to young players and how Jagr had already accomplished an entire career’s worth of accolades when today’s stars were just getting out of the womb.

One problem: Jagr is in his 23rd season in the NHL, as he spent four seasons in the KHL. Anybody who knows anything about Jaromir Jagr knows that he spent four years in Russia. I mean, did somebody just subtract 1991 from 2017 and say “DONE”? Come on, people. If he had spent 26 seasons in the NHL, this shirt would have been sold four years ago when Jaromir was a Flyer!

But hey, I’m starting to think that hockey and math don’t exactly mix, especially after Mikhail Sergachev’s creative number crunching after his Russian squad lost to Canada at the World Juniors:

"We can beat that team 100% every time. They're only good in the first period. We should have won that game." – Sergachev. #Habs

Yeah, that’s not the definition of 100%. (I’m looking forward to how he will explain how Russia actually defeated the United States on Thursday.) But I can’t completely blame Sergachev. Canada makes you say and do stupid things.

Merry Christmas and Happy Holidays from everyone here at @NBCSports! pic.twitter.com/dGbRtpQASa

No hockey players. Christmas is ruined.