Welcome once again to This Week in NHL Stupid. Every week we track the ugly, the silly, and the stupid in the world of hockey, and this is our first edition of this feature in 2017. So let’s get the puck dropped and let’s get this going.

Well, it wouldn’t be a proper start to the year without somebody forgetting the ceremonial pucks. And somebody had one job: Get Bobby and Brett Hull pucks for the puck drop. I mean, it’s in the name, right? Puck drop. It’s baffling.

But at least we had a great semifinal game in the World Juniors, right? The United States took Russia to a shootout that went seven rounds, three of them featuring Troy Terry shootout goals including the winner which sent Team USA to the gold medal game. 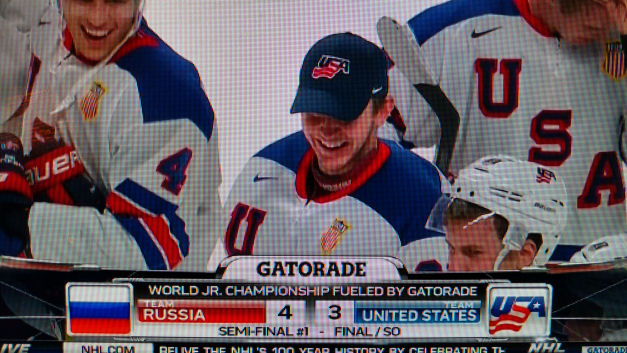 There’s a reason that’s guy is laughing. Because font guy gives the winning goal to the wrong team. Font guy had one job.

Speaking of the World Juniors and stupidity, how about Sweden in overtime of the bronze medal game:

After Sweden had dominated the third period? That’s how they lose??? Defense pair completely breaks down and the goalie gives up a cookie? A cinnamon sugar cookie with sprinkles at that! That is a stupidly heartbreaking way to lose a game and a medal.

But the height of stupid might have come Thursday night as there were two straight challenges in the Predators/Lightning affair:

Seven minutes and 41 seconds straight of challenge time. I don’t know what’s more stupid: Was it the referees reversing the goalie interference call, which is basically a judgement call? Was it Jon Cooper deciding it would be a glorious idea to challenge offside on the play when the puck was 30 feet in the air? Or is it the whole lousy replay system for merely existing?

That’s for you to decide, until next week when we bring you more riddles of stupidity in “This Week in NHL Stupid”.