With Ondrej Palat coming back for the Tampa Bay Lightning, they sent down highly-touted forward Jonathan Drouin to the AHL affiliate in Syracuse. Drouin has had a bit of a tumultuous start to his NHL career to say the least.

That isn’t to say Drouin has played badly. It is more to say that he has yo-yo’d all over the organization and seems unable to find a spot in the Lightning organization. He even has demanded a trade, which apparently stems back all the way to November. Will Steve Yzerman trade the talented winger? Maybe, but Drouin undoubtedly should be getting more of an opportunity than he is currently.

A great quote from Ryan Wilson of Hockey Buzz  put the situation into perspective perfectly:

“Some people have criticized Jonathan Drouin’s ability to play a 200 foot game but I always have found that line of thinking funny because it never seems to apply to players who are completely inept offensively. It is one of those silly double standards that punishes skilled players.”

Why do teams do that? He supposedly isn’t performing up to their standards but he is doing just fine. These are his stats in his short tenure with the team via a HERO chart. 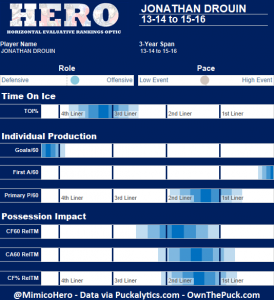 He finds himself playing at a first liners pace most of the time. The thought is that he must prove himself to get the time that he needs. While he may be cost controlled at the moment, you may end up wasting Drouin’s best years by putting him in a situation that doesn’t allow him to succeed. What exactly needs to be proven? He has shown what he can do but he isn’t playing to an arbitrary standard that is outdated.

A situation that is opposite in nature is the handling of Ryan Murray with the Columbus Blue Jackets. He is 22 years of age and is now being criticized for not fermenting in the minor leagues. Over the course of his very young career with a bad defensive corps he has performed admirably. Just ogle and ogle at this HERO chart of his. 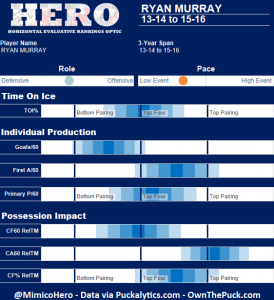 Would you have rather have him contribute to a team that is supposed to supplement the big club or actually contribute to the team that matters most? Of course it brings about a bunch of inherent risk but isn’t that the point of playing the games is putting the best players on the ice and letting them decide the outcome of the game. Coddling and leaving your best players out of the picutre is short sighted.

The Red Wings get an awful lot of credit for having players stay in the minor leagues for long periods of time. They dressed players like Johan Franzen and Dan Cleary way past their expiration when they had capable players Gustav Nyquist and Tomas Jurco sitting in the minors. They were only handicapping themselves, they may have seen the error in there ways too, as they have had recent draftee Dylan Larkin playing on the big club.

Trust your drafting and trust your development. Don’t hold your offensive players back for doing what they do best. Scoring.