The Vancouver Canucks have made some puzzling decisions of late. General manager Jim Benning isn’t exactly putting on a clinic on how to GM.

It’s hard to forget he handed out sizable extensions to bit-players. Derek Dorsett is a solid fourth liner, but is he really worth $10.6 million over four seasons? Benning thought so. The same day he signed Dorsett, he also signed defenseman Lucas Sbisa to an equally perplexing three-year $10.8 million deal. The term and length of contracts were both ridiculous, and it’s even worse when you think about how easily both players could be replaced with cheaper alternatives. 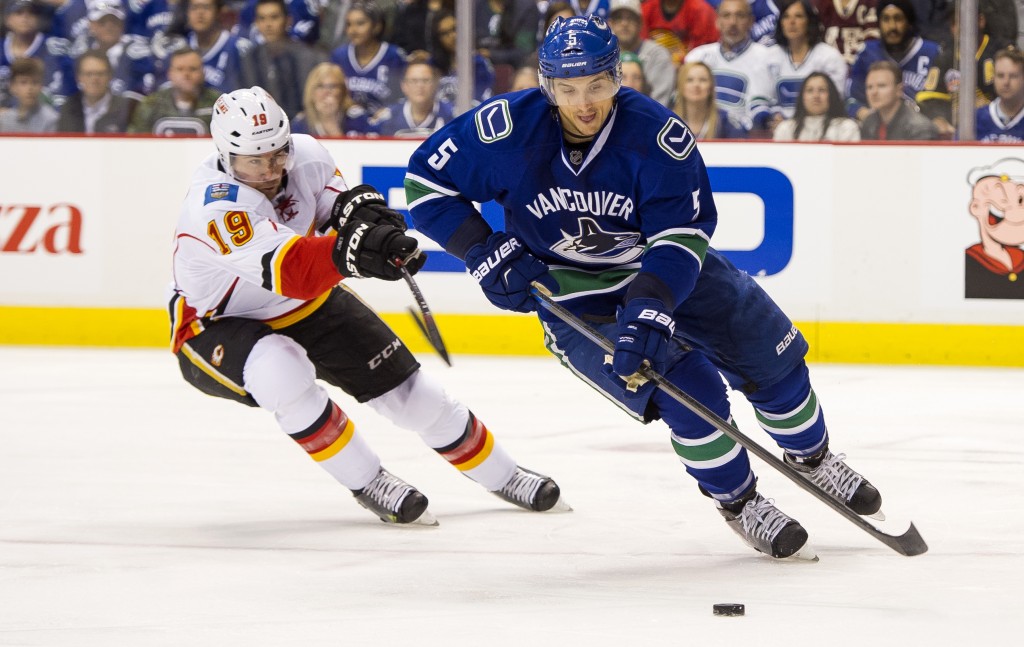 VANCOUVER, BC – APRIL 15: David Jones #19 of the Calgary Flames tries to check Luca Sbisa #5 of the Vancouver Canucks in Game One of the Western Conference Quarterfinals during the 2015 NHL Stanley Cup Playoffs at Rogers Arena on April 15, 2015 in Vancouver, British Columbia, Canada. (Photo by Rich Lam/Getty Images)

Benning thought the Canucks needed a tougher fourth line at the expense of potential, by trading young under performing Zack Kassian and a fifth-round pick to the Montreal Canadiens for Brandon Prust. While Prust is a great locker room player, he’s at best a bottom-six forward who doesn’t do much more than physically agitate. He’s got a higher salary than Kassian and is set to be a UFA at the end of the year. Kassian on the other hand is just 24, and still has some potential. While he has not fully realized that potential, it’s a great gamble by Montreal. To get a draft pick is icing on the cake. Benning could have signed a player with Prust’s skill set cheaply on the free agent market, and flipped Kassian for something of actual value.

The Canucks goalie situation is clear now, but was it mishandled?

The team had three goalies they believed were NHL caliber in Jakob Markstrom, Ryan Miller and Eddie Lack. Statistically, Lack had the best season of those goalies.

The 27-year-old fan favorite seemed like a player the Canucks may want to hang on to, but Benning traded Lack to the Carolina Hurricanes for a third and seventh-round pick.

While that’s not a horrible move, what followed was bizarre.

During the Canucks Summer Summit this week, Benning admitted he could have moved Miller instead. He basically told the fan base he traded a beloved, younger and cheaper player for a meh return when he could have moved the older, more expensive one. There was no reason for him to divulge that information, other than to piss off fans.

Jason Botchford of the Vancouver Province reported the Canucks could have gotten a higher return for Lack if they traded him within the conference, but opted to trade him to the East because they didn’t want Lack to come back to bite them and beat them for a playoff spot.

So, there remains no mystery in why they traded Eddie Lack. Debate it all you want, he wasn’t their guy.

But the execution of that deal remains murky, a minefield of perceptions.

Western Conference sources involved in the negotiations say the Canucks turned down three offers that were better than the one they accepted from Carolina.

The contention, from their view, is that trading Lack in-conference to teams who could then beat the Canucks out for a playoff spot was a non-starter.

Vancouver does, however, acknowledge it was reluctant to trade Lack to a team in the west, particularly to a divisional rival, but say it could have been swayed for the right price.

Benning admitted recently that people around the league viewed Lack as a backup, so why would he be afraid to trade him within the conference? Even if he did value Lack more than a backup goalie, you’d think he’d take the risk of trading him within the division to secure better assets in return for the Swedish goalie.

Now, I’m not ready to declare the Canucks a lost cause or Benning a bad GM. He’s made some nice moves as well. But he’s had a rough summer. The Canucks haven’t improved and their direction seems unclear. We’re still in the midst of the offseason so there may be more to come, but for now, Benning has come up short.