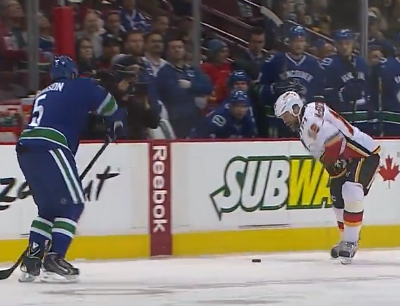 Brian McGrattan isn't exactly an offensive weapon. The enforcer entered Calgary's game against the Vancouver Canucks with just seven goals over the course of 290 games. With that in mind, it was only appropriate that he recorded an extremely unusual goal for the Flames in a losing effort against the Canucks.

Watch as he beats goaltender Eddie Lack from center ice:

McGrattan put a lot on the shot, but this should have been a routine save for Lack. Fortunately for the Canucks, Lack didn't let this goal faze him and he turned away all of the remaining shots he faced.