The NHL has released tacky sweater themed jerseys in the past for the holiday season, which I compared to the tacky sweater worn by Colin Firth’s Darcy in Bridget Jones’ Diary. I can’t imagine that they were such big sellers among the fanbase that someone in marketing wanted to spin off actual ugly sweaters, but here they are.

Made for terrible “ugly sweater nights” at the game around Christmas, or your “ugly sweater party” at work that is supposed to be “fun,” the NHL has decided to embarrass teams with these monstrosities (click for a larger view): 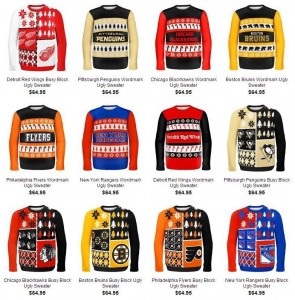 They certainly are successful at being both “ugly” and “sweaters.” I don’t know if fans of the 22 not-featured teams are upset that their team hasn’t been given this treatment. As a Blues fan, I am not crushed that I won’t have the opportunity to purchase one of these to wear in December for a casual Friday.

The divided-squares look is certainly preferable to the horizontal name design, but neither are worth $65.