Perhaps the top priorities of any NHL franchise, behind goaltenders, are solid puck moving defenders. Elite center men are essential components of any winning team, however without defenders able to move the puck out of their own zone these forwards do not have as much opportunity to showcase their offensive skills.

It is very difficult to attain these types of players unless they are drafted by your franchise. However by looking at the underlying statistics some lesser known talent could be found and acquired.

A couple of the more celebrated puck movers are the Ottawa Senators Erik Karlsson and the Los Angeles Kings Drew Doughty. It is generally very easy to look at goals and assists to determine which defenders are the best puck movers. However what about those where their skill does not show directly in the well-known goals and assists statistics.

A simple way to expose this skill within advanced statistics is to look at a player’s puck possession ratings and zone starts. Specifically looking at their Corsi for (we will keep it simple and call it shot attempts for) which can give an indication of the amount of time a player spends in the offensive zone. For example, a player with 60% shot attempts for means they are spending approximately 60% of their ice time in the offensive zone.

It has been proven by some of the better mathematical and statistical thinking minds that shot attempts for and zone time very closely matches over the long term. The second statistic to consider is the percentage of shifts that a player starts in the offensive zone.

A simple way to view a player’s puck moving skill is to minus the player’s offensive zone start percentage from their shot attempts for percentage. With offensive zone starts a player is starting their shift in the attacking zone. A player that starts more shifts in the defensive zone and has a high percentage of shot attempts for is in theory a very good puck mover. Despite starting more shifts outside of the attacking zone they are able to get the puck up the ice and create chances for their team on offense.

Granted there are many ways to know who the best puck movers are with the “eye test”. This method simply points to players the eyes may not have considered before.

Among defenders with more than 200 minutes played thus far here are the top ten puck movers based on these above described statistics. These numbers were compared to the players own team to attempt to balance out quality of competition and teammates and their effects on the results. 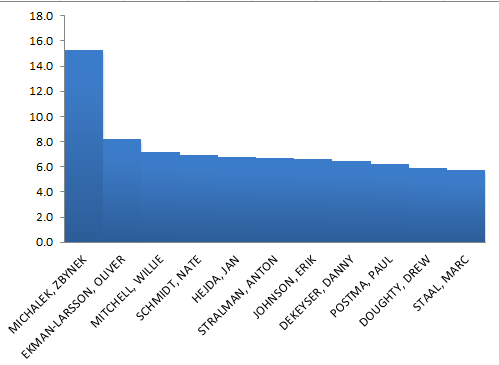 Here is the bottom ten puck movers based on the described statistics. 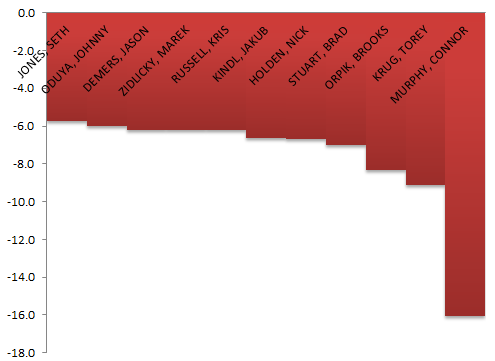 Lastly here is where some of the more well-known named defenders fall when compared with this statistic. 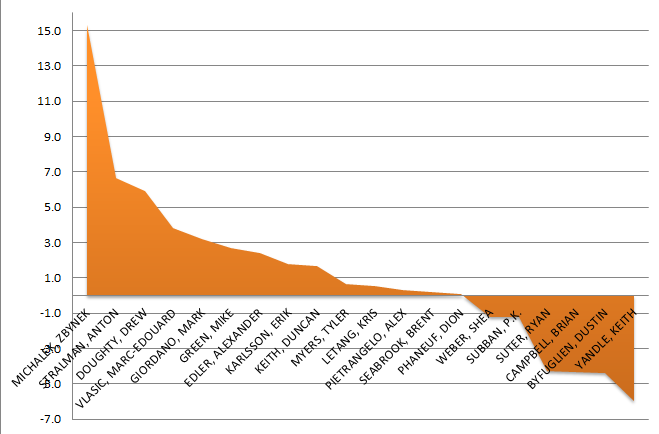 Essentially what these charts indicate is the percentage of offensive zone time that the player had without the benefit of an offensive zone start relative to their teammates. This may be an oversimplified method of looking for good puck moving defenders, however it can be an effective tool when looking for a lesser known player who may fit that mold.

For example, Nate Schmidt and Paul Postma could be effective puck movers that a team may be able to pick up for minimal cost due to their relative lack of exposure.

Nate Schmidt is an undrafted 23 year old defender currently playing for the Washington Capitals. He has split his time between the AHL and NHL over the past two seasons with 46 NHL contests and 46 AHL games under his belt.

While Paul Postma is a former seventh round pick of the Winnipeg Jets (then Atlanta Thrasher) franchise from 2007. The now 25 year old has shown great potential at the AHL level accumulating 142 points in just 219 games. He has not been an impact player at the NHL level to date, however the potential is there.

Any team looking for inexpensive help on defense would be wise to potentially take a flyer on these types of players. Who knows, perhaps they may uncover an essential piece of their franchise for years to come in the process.