Welcome back to another edition of the NHL Index. Below you'll find some of the biggest stories, hottest teams and best goals from the past week.

Biggest story of the week

Semyon Varlamov was the talk of the NHL this week and not for his solid play so far this season.  The Colorado Avalanche goaltender was arrested on domestic violence charges early in the week.  He was released on $5,000 bail and did play this week in a game against the Dallas Stars, which the Avalanche won.  These are serious charges against Varlamov and the Avalanche organization is fully backing him.  Should they have let him play?  It obviously didn’t alter his game but I think it was a poor decision by the Avalanche to put him in a game given the situation.

Kari Lehtonen save against Colorado

1.  Colorado – Even with a major distraction this week, the Avalanche kept on rolling with three wins.
2.  San Jose – Formally the top team, the Sharks dropped two games in extra time.
3.  Anaheim – No one seems to be talking about the Ducks and their great start.  Bruce Boudreau is a  regular season champion.
4. Pittsburgh – After a tough week, the Penguins bounced back and went 4-0 this week.  They beat the Bruins on Wednesday in a great early season game.
5. Phoenix – The Coyotes beat two division foes(Kings and Sharks) but are still in third place.  The Pacific division is loaded.

This is the second time the Flyers have had the biggest meltdown of the week.  They got destroyed by the Capitals 7-0 on Friday and decided to goon it up in the third period.  No one should be surprised, the organization is coming unglued.

Mike Smith.  He beat the Kings and Sharks this week, turning away 89 of 92 shots.  Looks like someone wants to be goalie for Team Canada.


John Scott was suspended 7 games for his hit on Loui Eriksson. Patrick Kaleta was placed on waivers and will now be playing in the AHL.  The Sedin twins inked identical contract extensions with the Canucks(4 years, 28 million).  Max Talbot was traded from the Flyers to the Avalanche for Steve Downie(Downie broke his face against the Capitals on Friday).

Three weeks into the NHL season, and there is already almost too much happening. So we created the NHL index to keep you up-to-date on everything.

Biggest Story of the Week

Two suspensions were handed out last week for dirtball hits and another suspension is coming.  First, Patrick Kaleta was suspended 10 games for his sneaky headshot on Jack Johnson of the Columbus Blue Jackets.  Maxim Lapierre was suspended for 5 games for trying to decapitate San Jose’s Dan Boyle.  Colorado forward Cody McLeod looks to be the next player to be suspended after boarding Detroit’s Niklas Kronwall.  No matter what the punishment seems to be, these hits can’t seem to go away in the NHL.  No matter what rules are in place, there are always going to be players who cross the line and make poor decisions.  Shanahan should be given credit for punishing these hits.  The Kaleta hit, even though it didn’t injure Johnson, could have been worse.  His 10 game suspension should send a message to him that he needs to change his game.  Even Matt Cooke is trying to help Kaleta.

Goals of the Week

We have a feeling Duchene is going to have a regular spot here:

1. San Jose – No losses in regulation yet.
2. Pittsburgh – Marc Andre Fleury has won his first 7 starts to start the season.
3. Chicago – Fast start for the Blackhawks, demolished Toronto Saturday night.
4. St. Louis – Had a tough loss against the Sharks earlier in the week but have beaten the Blackhawks twice.
5. Colorado – They’ll have a tough test against Pittsburgh on Monday night. 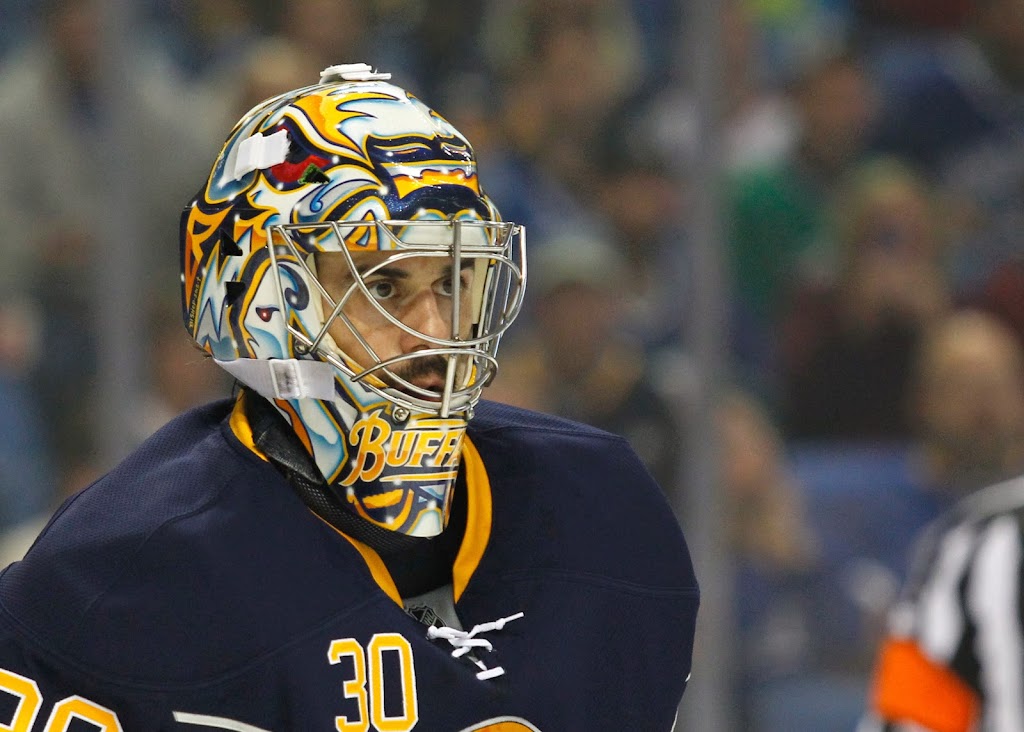 1.  Buffalo – How is Darcy Regier still the GM?  How is anyone affiliated with this group still employed?  This team is a disgrace.
2.  Philadelphia – Who would’ve thought Steve Mason would be their best player?
3.  New York Rangers – There 9 game road trip to begin the season has turned into a nightmare.
4.  Edmonton – Nail Yakupov was benched earlier in the week in attempt to get him to change his game
5.  New Jersey – Finally got their first win Saturday night, but it’s rough times in Jersey. 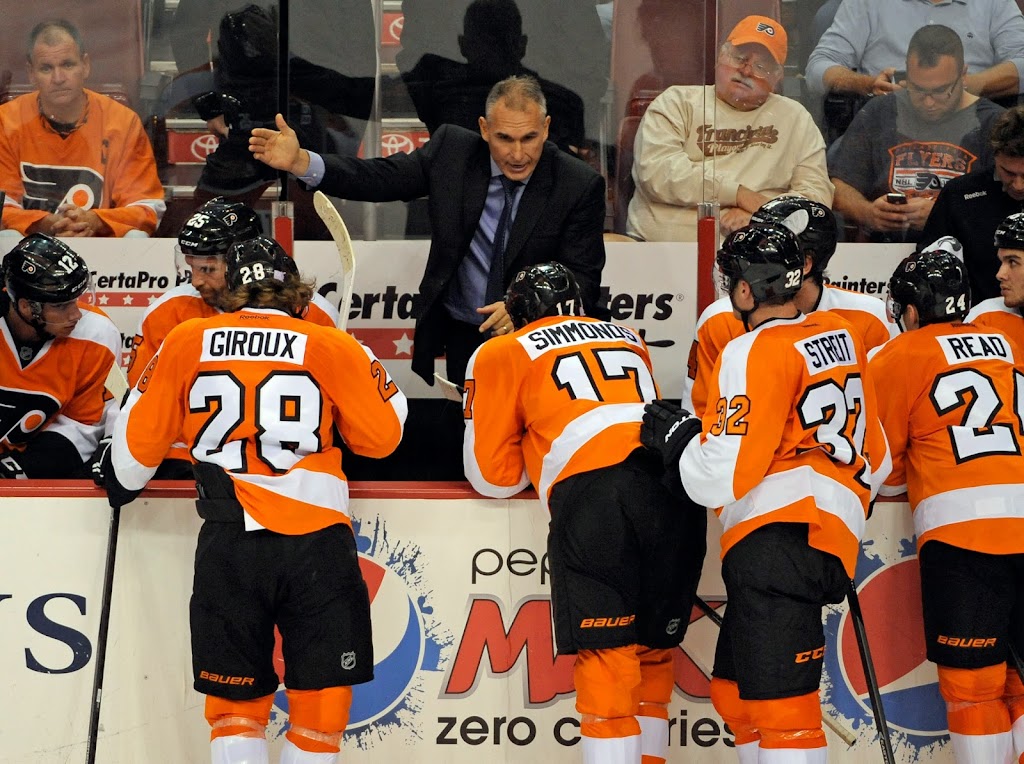 Philadelphia is a powder keg right now.  After firing Peter Laviolette and hiring Craig Berube, the Flyers have continued to struggle.  Injuries to Lecavalier and Hartnell certainly haven’t helped.  Steve Mason has actually been reliable, which might be the only silver lining.  But they just can’t score goals right now.  Giroux (0 G 3 A in 8 GP) has been a wreck this season with all the pressure on him.  You have to think Paul Holmgren’s time may be running out.  With Laviolette gone, and Ron Hextall waiting in the wings to be the next Flyers GM, the Holmgren era may be over soon if the Flyers can’t turn this around quickly.

Mistake of the Week

Jonathan Bernier gives up the game winning goal against the Hurricanes 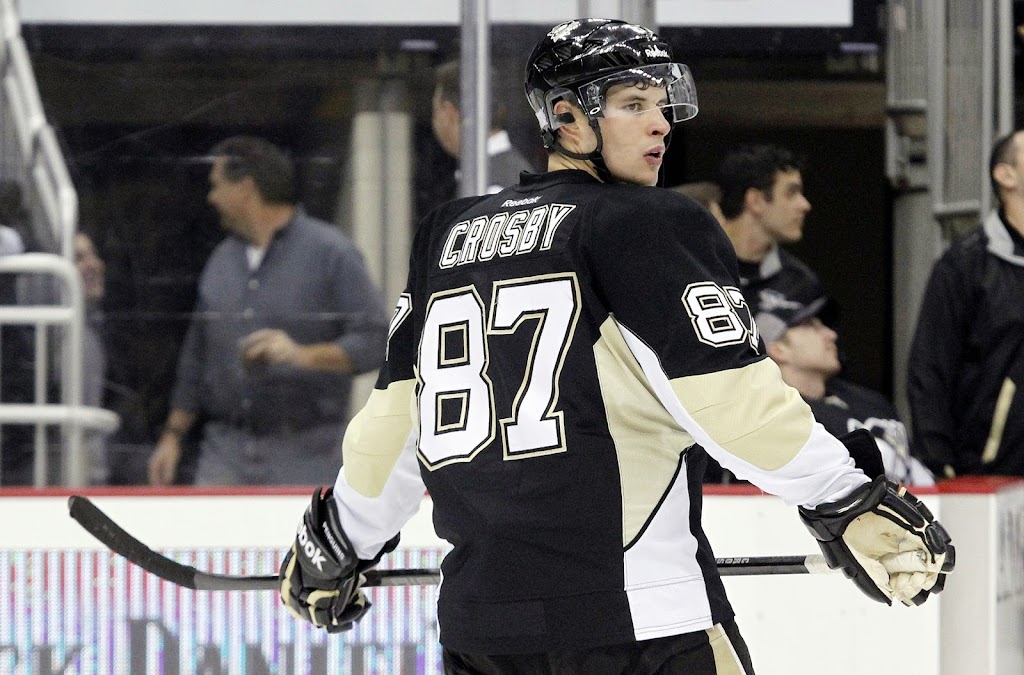 Sidney Crosby. 2 Goals, 6 Assists in 3 games this week.  He’s on an incredible 2 points per game pace.  If he can stay healthy this season, look out.


NON-NHL moment of the week