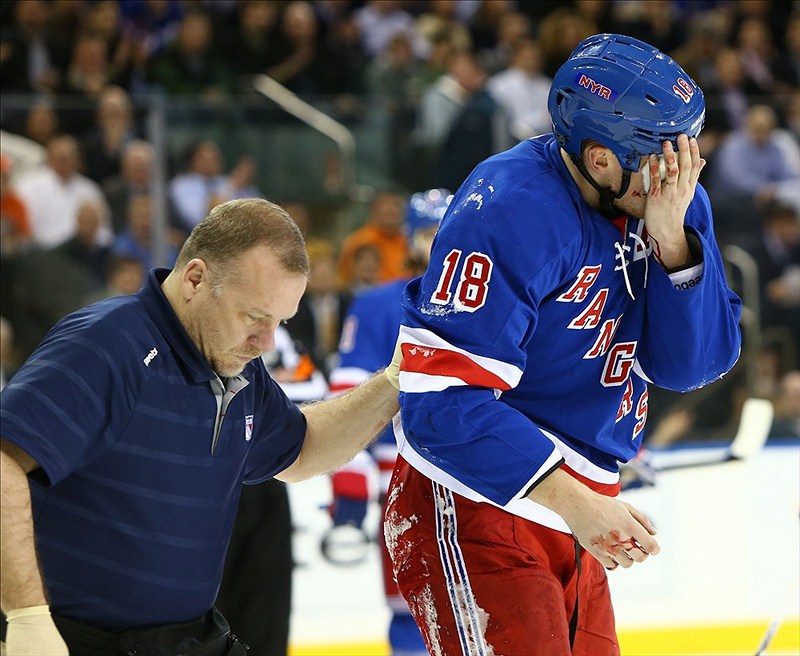 New York Rangers defenseman Marc Staal has been sidelined ever since he suffered a frightening injury when a deflected puck struck him in the eye back on March 5. The incident, one that was horrifying to watch, made fans question whether or not he would be able to suit up again during the 2013 season.

Jordan Staal of the Carolina Hurricanes, Marc's brother, is optimistic that he will play again before the current season concludes, as seen in a report from ESPN.

Jordan (pictured right) mentioned to ESPN that his brother was in good spirits and is making progress in his recovery.

"He's doing well. He's slowly getting there. Obviously, there's still a little more healing to be done, but things are looking up for him."

This is pretty encouraging news considering Marc suffered non-displaced fractures on the play. He's also been suffering from some vision loss, a problem he is still battling through. His vision is improving, but it's not back to 100 percent. We all imagine Marc wants to get back on the ice as soon as possible, but it's safe to assume that the team will deal with an injury as serious as this one extremely cautiously.

Jordan couldn't pick a date when his brother would return to the ice (not even New York team doctors have been able to do that), but he is hopeful a return will happen this season. He added that Marc will be sporting a visor when he does return, a move that's expected of a guy recovering from a massive eye and face injury.

The New York Rangers end their 2013 regular season on April 27 at home against the New Jersey Devils.