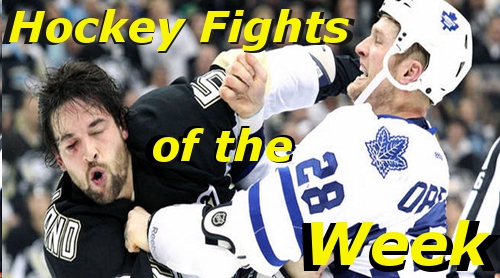 Welcome to another edition of Hockey Fights of the Week! This time we take a look at the bouts that took place between January 28th and February 3rd.

What's in store? How about the rare occurrence of two fights taking place at the same time. We'll also throw in an altercation between Bryan Allen and Jordan Nolan where the mitts went flying – literally.

The Reaves/Boll scrap isn't very exciting. However, when you add in the Scott Nichol / Derek MacKenzie fight that takes place at the same time, then you have a video worth watching. Ever since the league instated that the second fight would automatically receive a misconduct, you have a better chance seeing Scott Gomez score a goal than you do seeing two simultaneous fights.

Honestly, this fight was only included so I could say "Down goes Fraser."

The expression "drop the mitts" sometimes doesn't apply. Sometimes those mitts go flying, in a rather comical manner.

If you like punches to the body, this fight is for you.

Perhaps the broadcast just wasn't picking it up, but this might be the quietest a crowd has ever been when a fight broke out.