To say “things aren’t going according to plan” is an understatement if you’re the Buffalo Sabres. The team has either not qualified or hasn’t advanced past the first round of the playoffs in five seasons, which will soon become six after this season is officially over.  Lindy Ruff, a man who has been a fixture behind the Sabres’ bench since 1997, was fired mid-season and was replaced by Ron Rolston. Jason Pominville was traded to the Minnesota Wild at the trade deadline, and now there are rumors that Thomas Vanek may be shopped around. With so much negativity surrounding the organization emotions can boil to the surface.

On Tuesday, those emotions boiled over on Twitter. An exchange took place between Mike Harrington, who is a Sabres beat writer for the Buffalo News, Sabres center Steve Ott, and Erica Halbrook, who happens to be Ott’s fiancee. 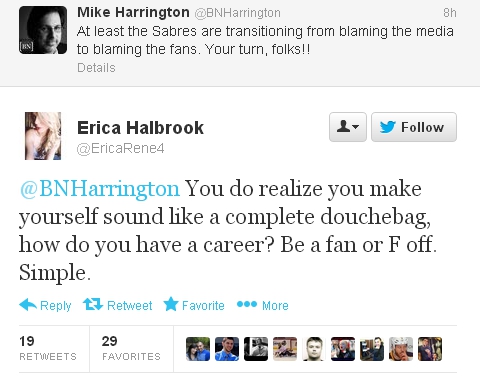 It would help to explain where the original tweet from Harrington came from. On Tuesday, Harrington wrote an article on his blog quoting Ott as saying that it's "completely ridiculous" that fans boo in their home arena. The article spread like fire over social media outlets and garnered a lot of attention, especially from Ott, who felt that he was misquoted.

@bnharrington stop being a joke, there's no blaming our fans. Just wish it was a great atmosphere for everyone's experience!

Then Halbrook sends a nasty tweet of her own, because for some reason she feels the need to come to her fiance's rescue.
This absolutely reeks of Ryan O' Reilly's dad, doesn't it?
Listen, all paying fans are allowed to voice their opinions. If the team is completely sucking — and the Sabres are — they are within their rights to voice their opinions. They are spending the very little disposable income they have to help the team pay your contract. It would be wise to not bite the hand that feeds you. It also helps to not call a respected member of the media, especially someone who covers your fiance, a douchebag.
Those tweets lead to this reply by Harrington to Halbrook:

You would've thought Halbrook would've known this before she said "be a fan or F off," but obviously she didn't. That's why most sports journalists are respected — they have the ability to report the news in an unbiased manner. You're not allowed to cheer in the press box, as much as you'd probably like to. There's a reason for it; it's unprofessional to show any hint of bias. 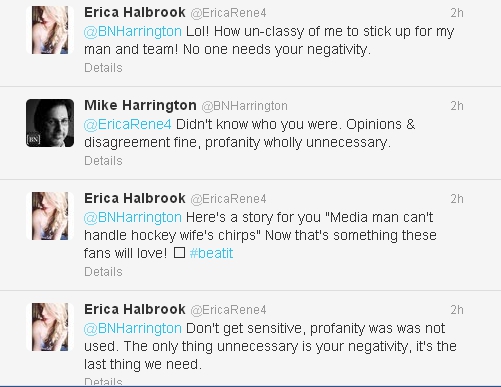 Harrington is right — you can get your point across a lot better if you don't curse like an immature teenager. Halbrook lost most, if not all, of her credibility once she called him a "douchebag" and Harrington is right for calling her out on it. She tries to be even more snarky with him, but Harrington has enough respect for himself to not stoop to her level and respond.
Ott and his fiancee handled the entire situation wrong. With everything that is going on within the organization, the last thing the team or Ott needs is more bad publicity. Sadly, Ott hasn't offered any sort of apology for this. It would really be in his best interests to do so in order to try to smooth things over with the fans. Hopefully, it isn't too late.