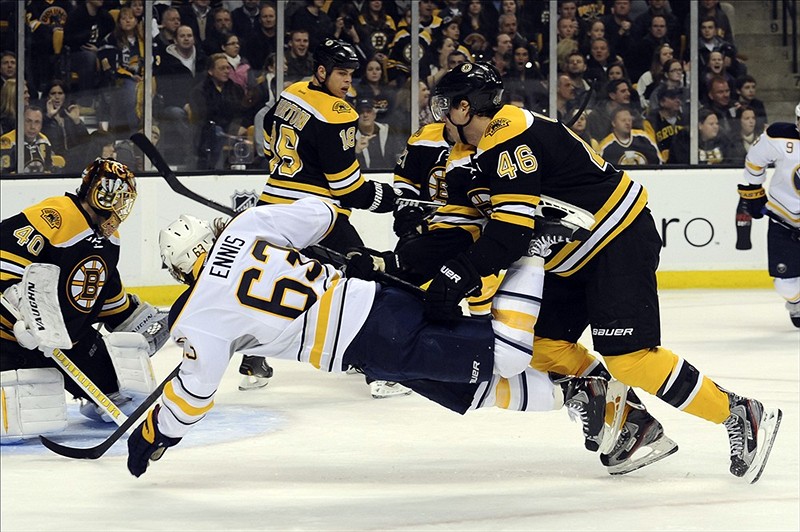 It seems as if each time the Boston Bruins face the Buffalo Sabres the rivalry between the two teams intensifies. In case you've forgotten what brought the rivalry to a boil back in 2011, here's a video reminder of the Milan Lucic hit on Ryan Miller.

The two clubs still have plenty of anger brewing in 2013. When they squared off on the final day of January, the Sabres walked all over the Bruins in a 7-4 victory. A late timeout called by Buffalo angered Boston's Brad Marchand, claiming it was "disrespectful". Buffalo claimed they needed to call timeout in order to ensure the protection of their players after Boston deployed enforcer Lane MacDermid with just a few seconds left in the third period.

As if that wasn't enough, there's also the Drew Stafford elbow on Dougie Hamilton which helped add another element to this already turbulent rivalry.

You've got to give credit to Buffalo and Boston – they know how to give us plenty to talk about.

First, let's tackle Brad Marchand's issue with the timeout. It does seem a bit odd that an opposing team would call timeout up 7-4 with barely any time left on the clock. However, Buffalo claims to have had a valid reason for holding up the game by calling timeout, insisting they needed to change their lines in order to get John Scott out on the ice to neutralize Boston's Lane MacDermid.

If you see the other team deploy an enforcer late in a game that has already been decided, wouldn't you want to match it? No coach wants to see a repeat of the Pittsburgh / Philadelphia mess we saw in April of 2012. When you consider that Boston specifically dressed MacDermid to add another fighter to the lineup, you can't really blame Buffalo for wanting to counter in order to make sure the game doesn't get out of hand with just a few seconds remaining. If your fighter is going to be out there, we want our guy out there to match him.

The end result was a timeout that Boston took offense with, even though the reasoning behind it might be justified in the eyes of the Buffalo Sabres. If Marchand is so concerned about the opposing coach being disrespectful by calling a timeout, maybe he and his teammates should have put forth an effort that didn't embarrass Boston fans in the first place. Buffalo calling timeout should be the last thing on Boston's mind after the Sabres came in and thoroughly bested the Bruins in the Garden.

That elbow looks to be pretty intentional from Stafford. Did Hamilton leave his skates and fall to the ice with a bit of embellishment? Perhaps, but that doesn't take away from the original dirty play from Stafford.

While neutral hockey fans enjoy watching and following an intense rivalry, it's important that this Boston/Buffalo feud maintains the elements of hockey we all love and avoids sinking into a dirty, theatrical version of the game.