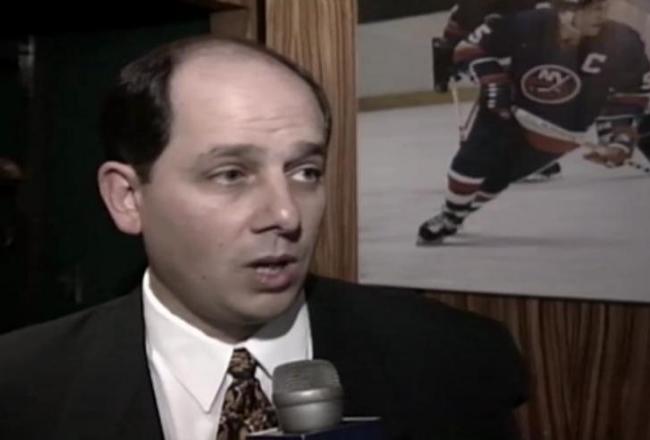 When you're able to make Mike Milbury, the famously abrasive hockey analyst, a sympathetic figure over the course of a 90-minute documentary, well, you've certainly accomplished something.

Unfortunately for ESPN and Kevin Connolly, in the latest installment of their 30 for 30 series profiling former Islanders owner and professional con artist John Spano, that's just about all they accomplished.

Connolly's story begins with a whirlwind adventure through his childhood where the Islanders were the kings of the early 1980s, which spans the film's first 20 minutes. After that, he skips through roughly 12 years of the franchise's post-dynasty ineptitude, which was apparently decidedly less memorable.

You know, the same franchise that was given the keys to the hockey world's penthouse with stars such as Bossy, Nystrom, Smith, Gillies… oh no, I'm doing it now too. After the Oilers had brought their reign to an end, the team steadily wilted over a 10-year period in which their yearly playoff hopes were about as durable as Pierre Turgeon's shoulder socket.

Under the waning leadership of John Pickett, who did more or less did nothing to cultivate or develop talent aside from drafting Pat LaFontaine, the Islanders fell on hard times. But  between old photos of Connolly attending games at age eight and a wildly drawn out homage to the glory days, you probably didn't even notice.

Once we're introduced to Spano, we get a surprise cameo from the poster child for controversy in the hockey world, NHL commissioner Gary Bettman. Surely, his role in this film was to shed some light on how an oversight of this magnitude was anything but the League's fault. Because, you know, the National Hockey League doesn't have an extensive history of legislative blunders under his leadership or anything.

But predictably, through segments narrated by Connolly's boyish, fanatical voice in which at one point he mistakes the Islanders for a "legendary NHL franchise," Bettman gives off the vague impression that the people on his end did essentially no investigating on Spano. As the story is told, if a guy claims to have $165 million to buy a hockey team, who are they to not take him at his word?

I don't know about you, but that kind of legal strategy already has me excited for the end of the next collective bargaining agreement in 2020.

As interesting as it was to see Spano tell his side of the story, it was equally as frustrating to see Connolly's reactions to his comments, like our friends at Awful Announcing said. It's as if he declared himself the face of the average New York Islanders fan. Oh, who are we kidding, he did that years ago.

But for all it's shortcomings, "Big Shot" still offered as interesting a storyline as any of the previous films in the series. Newsday's John Valenti, who famously broke the story of Spano fleeing the country, and Peter Botte of the New York Daily News gave a fascinating play-by-play of Spano's demise, and just how much an entire community had been fooled. Brian Rosenberg, who served as Vice President of the luxurious Garden City Hotel during Spano's tenure as Islanders owner, which rivaled Neil Smith's as General Manager in length, also gave insight into just how close he was to pulling this off.

According to Rosenberg, when it all hit the fan it was merely a matter of days before a group he was spearheading would give Spano the funding he needed to smooth everything over. After all the lying, the stalling, the evasive maneuvers Spano pulled, he was potentially hours away from getting away with it.

But despite the documentary being centered around Spano, it was Milbury who shined the brightest. Iron Mike did what he does best when describing exchanges with Spano a number of times: he berated him. But the easily detestable NBC Sports personality simply came off as a frustrated hockey mind dealing with an awkward man who knew very little about the actual sport. He was hamstrung by Spano as a coach and general manager.

In fact, Milbury's exchange with Tom Croke, co-founder of the Save the Islanders Coalition, in which he physically threw Croke out of the team's Uniondale office, perfectly summed up the garbled signals Spano was sending to his subordinates.

But in the final minutes of the film, there sat a humbled Spano–choked up at times–explaining to Connolly why he tarnished the happiest memories of his childhood. It felt like little more than reconciling a vendetta from years ago, and accepting a broken man for who he has become. While the story of John Spano is certainly fascinating, Kevin Connolly's production of it was more of an apology to a loyal fan than a thorough investigation of events.