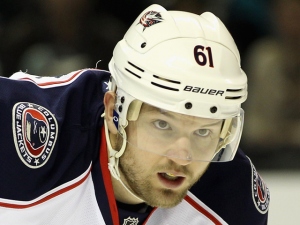 After weeks of speculation and rumors, the biggest asset at the 2012 trade deadline, Rick Nash, ended up staying with the Columbus Blue Jackets. After failing to move Nash, GM Scott Howson squarely inserted his foot directly into his mouth – which you can read about here.

After the deadline expired on Monday afternoon it was rumored that the New York Rangers made a serious push for Rick Nash but were ultimately told their offer wasn’t large enough. What exactly did the Rangers offer that Howson casually brushed aside? According to Larry Brooks of the New York Post, a lot. Columbus turned around with an offer for New York that can be described with one word – laughable.

Brooks reports that the offer to bring Nash to New York involved sending Brandon Dubinsky, defensive prospect Tim Erixon, 2011 first-round pick J.T. Miller, 2010 second-round pick Christian Thomas and a first-round pick at the 2012 draft. In total, New York was prepared to send five pieces to the Blue Jackets in order to bring Rick Nash into the mix. It’s not often you see five pieces swapped for one, which would have easily made this the biggest trade in recent memory.

Howson rejected this deal and instead countered with an even larger offer. A laughable offer. Howson’s offer back to New York was Nash for Dubinsky, Ryan McDonagh or Micahel Del Zotto, Derek Stepan or Carl Hagelin, 2009 first-round pick Chris Kreider and to top it all off, a first-round pick in 2012. New York denied this offer and wisely so.

It’s understandable that Howson wants a quality return on Nash. However, there’s a fine line between expecting a lot for a player and being greedy/foolish – a line that Howson has apparently trampled upon.

Realistically, it wouldn’t have made sense for the Rangers to meet Howson’s demands. It’s one thing to tinker with a contending lineup and it’s another to remove three prominent faces from a squad that has put together a serious run at the Stanley Cup. Even with Nash’s skill in the lineup, the Rangers would have had to shuffle their entire lineup if they had accepted the counter from Howson. Sensibly, New York walked.

Will Howson’s price come down after the season ends? Probably not – assuming he is still in a position to set the price and not looking for a new job after this latest debacle. It’s clear the Rangers want Nash. They really want Nash. They will pay a high price to get him. It’s not too much of a stretch to think the Rangers will raise their offer once the season concludes. However, now just wasn’t the right time for the Rangers to turn their roster upside down for a prized asset.