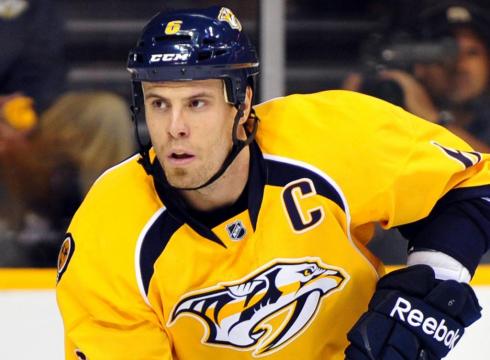 Granted, technically this hit on Henrik Zetterberg by Shea Weber wasn’t a traditional hit. It was more of a “I’m gonna fight you, Steve!” kind of move than anything else:

The reaction on Twitter was immediate and universal: “What the hell was Weber thinking?” It didn’t seem to matter what team you were a fan of (disclaimer: I’m a Blues fan and dislike the Wings, but I still thought that Weber should have been suspended), you were at the very least confused as to what Weber was doing with that move. He goes to hit Zetterberg, misses, and then just grabs him by the helmet and whaps his head into the glass a few times. Sure, because that’s how you resolve conflicts in the NHL now. Zetterberg was trying to do a little annoying message sending by the time the final horn sounded, but it wasn’t bad, and it didn’t warrant something that would get you assault charges in the outside world.

So, how’d the NHL come down? A suspension? Of course not! Why, it would be silly to suspend someone for a pre-meditated head shot. Let’s just fine them the maximum CBA allowed $2500 and be on our way:

“We felt this was a reckless and reactionary play on which Weber threw a glancing punch and then shoved Zetterberg’s head into the glass,” said NHL Senior Vice President of Player Safety and Hockey Operations Brendan Shanahan. “We reached out to Detroit following the game and were informed that Zetterberg did not suffer an apparent injury and should be in the lineup for Game 2.”

Well, since Zetterberg was ok, that eliminates the fact that he could have been injured by Weber’s stupidity. Ok. Shanny, this makes no sense at all. I understand the lack of a desire to throw off the momentum of an entire playoff series because of the stupidity of one player. Come on, though. There was clear intent to injure, because why else do you do when Weber did? Is intent to injure excusable when you’re in an exciting playoff series?

It’s disappointing, though completely unsurprising, that playoff discipline began with 17 penalties called against the two least penalized teams, chopping up the flow of the game. Why wouldn’t it do a 180 and then get concerned about ruining the flow of an entire series by suspending someone who needed to be suspended?