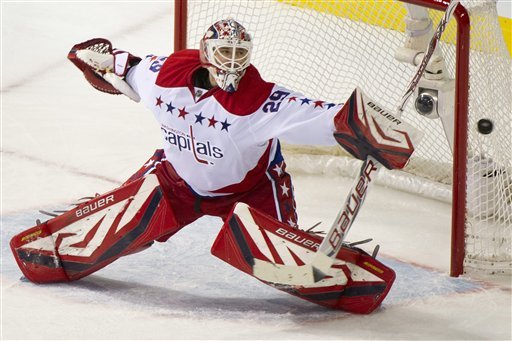 A little bit of “out of left field” news to start the day off. The Pittsburgh Penguins acquired the negiotating rights to Tomas Vokoun from the Washington Capitals this morning for a 7th round pick. If Vokoun doesn’t reach a deal with the Pens, he becomes an unrestricted free agent. When you take into consideration that he waived his no movement clause for this, it seems like Vokoun would at least like to give the Pens first crack at his talents — Vokoun wants the Cup, and there’s no doubt about it.

The Penguins were considered Cup favorites this season until starting goaltender Marc-Andre Fleury imploded to the tune of a 4.63 GAA and a .834 save percentage. Bye bye Penguins in the first round, despite the firepower that they exhibited. Was Fleury tired? Was he rattled? Or could he just not be bailed out by the rest of the team? Whatever the reason, Vokoun wouldn’t be a strict backup in Pittsburgh. His talent’s too much for that role, so chances are good that the Pens might be rolling with a 1A/1B tandem next season if the deal works out. Fleury played 67 games last season, which is a fairly high workload for a goaltender not named Lundqvist or Kipprusoff, so Vokoun would be extremely valuable insurance both in the regular season and playoffs.

Is this a vote of non-confidence in Fleury? I wouldn’t take it that far, but it is a move of a franchise that was disappointed in their playoff performance this season. The Penguins are a team that’s serious about winning, and this move just keeps them on that path.

EDIT: It was released by the Penguins that Vokoun has been signed for two years at an average value of $2 million. Talk about motivation for MAF.