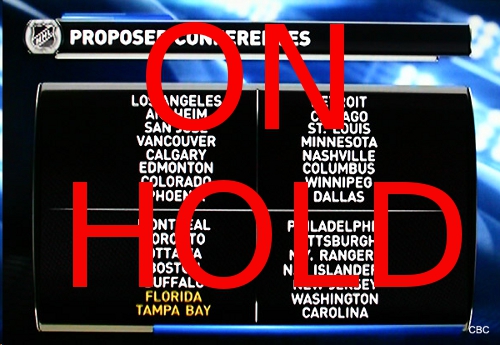 In an interesting development, the NHLPA has refused to grant their consent to the NHL’s new proposed alignment and playoff format that was set to take effect for the 2012-13 season. As a result of this news, the NHL will delay their proposed realignment and new playoff format and will use the current system for 2012-13.

In a statement posted on NHL.com, the NHL responded to the NHLPA saying,

“It is unfortunate that the NHLPA has unreasonably refused to approve a Plan that an overwhelming majority of our Clubs voted to support, and that has received such widespread support from our fans and other members of the hockey community, including Players,” said NHL Deputy Commissioner Bill Daly.  “We have now spent the better part of four weeks attempting to satisfy the NHLPA’s purported concerns with the Plan with no success.  Because we have already been forced to delay, and as a result are already late in beginning the process of preparing next season’s schedule, we have no choice but to abandon our intention to implement the Realignment Plan and modified Playoff Format for next season.”

As of the date of this article, the NHLPA hasn’t made their intentions clear nor their reasoning clear aside from the fact they are refusing to offer their consent. Evidently, the NHL created their alignment plans and new system without including the NHLPA, seemingly daring them to disagree.

Honestly, I’ve been a bit surprised that the new alignment and proposed new playoff system had moved forward as easily as it has to this point. The media continues to tout that a “majority” of fans are in favor, yet I’ve found there’s a sizable contingent that’s strongly opposed. Is it really that wise for the NHL to divide its fan base?

The proposed deal itself is full of inconsistencies. Four conferences, two with eight teams two with seven. Top four teams make the playoffs. It doesn’t take an expert in math to figure out which conference has a sizable mathematical advantage before the season even starts.

In my opinion, the NHL took a minor issue in Winnipeg’s alignment and came up with a solution that would change the entire shape of the NHL as we know it. The easy and simple solution? Flip Winnipeg into the Western Conference and boot Columbus or even Detroit into the Eastern Conference. Instead, the NHL came up with a bold decision to alter divisions, conferences and the playoff system that we currently use.

Personally, I understand the desire to promote and “enhance” rivalries through the new proposed playoff system but I can’t say I agree with it. I despise the realistic idea that by default, some of the best teams will by force be made to play each other early in the playoffs, eliminating them before they can exit the second round.

The NHL is also in a precarious position with casual fans and fans on the fringe. The argument could be made that the sport is ever growing in popularity, due to success stories in places such as Florida and New York to go along with the continued success from the Winter Classic. As evidenced by Twitter, more casual fans are tuning in, whether the NHL knows it or not. Dramatically altering the format of the league and the playoff system in one swoop, casual fans that are enjoying the current system may be turned away, without ever giving the new system a shot.

I sympathize with those joining the game late, so to speak, as it would be frustrating to follow a sport that keeps trying to change itself to what it feels the public wants, when all the public really wants is the game as it is with a few minor tweaks (one major one if you improve officiating). How is anyone, especially a casual fan, supposed to get used to the game when the game keeps making massive changes to its core?

To their credit, the NHL has made some positive changes over the past few years. My personal favorite was eliminating the two-line pass, which has sped up the game as a whole. Changes like that are minor enough where a casual or new fan can adjust to them, but an entirely new playoff format combined with four brand new conferences is an overhaul a struggling sport needs – not one from a sport that simply needs to gain some credibility and sustainability.

I speak for myself when I say I don’t like the new alignment and the new playoff system and I’m glad to see some individuals in charge of making decisions agree. I see the thought behind it and understand its merit (specifically the new alignment) but I don’t have to be in favor of it. I believe the new playoff format would be a huge leap back, preventing some teams from ever making the postseason due to the unfavorable “conference” they were placed in. Honestly, can you imagine Winnipeg or Columbus climbing into the top-4 in a group with Dallas, Detroit, Chicago, Minnesota, St. Louis and Nashville? I can’t either, barring unlikely major collapses.

Stay tuned to this story as its likely going to see a few more twists and turns before we see a conclusion. The NHLPA will undoubtedly have their side of the story to present while the NHL attempts to plug forward with their proposed ideas.