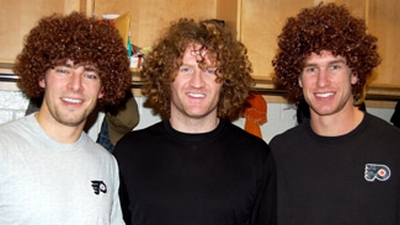 Oh, come on. How do you not market a guy like that?

With the close of another successful All-Star weekend, the NHL proved yet again what their advantage is over the other professional sports leagues: working as a team. It might sound trite, but the old phrase “there’s no ‘I’ in team” is something that the NHL accepts whole-heartedly. In other sports, individual personalities are bigger than the game. When the Miami Heat were defeated in the finals, what did you hear more often – stories about their team play or stories about LeBron James? The NBA tolerated LeBron’s massive press conference hoopla whatever that was in the summer of 2010, where ESPN focused on one player for an entire day. Was that press for the NBA? No. It was press for LeBron.

The hoopla around Albert Pujols’ contract with the L.A. Angels was a similar event – so much attention was paid to one individual that the Angels’ other big signing, C.J. Wilson, went fairly unnoticed. Think back and compare the discussion when Pujols was introduced as an Angel: was it about how it would improve his career, or was it about how he and the team could focus on a World Series?

I’m pretty sure that I don’t have to go in-depth on the Tim Tebow thing from this year.

Every so often, you see a team in a professional sport win something big as a team effort that eschews big name celebrity. The 2011 Dallas Mavericks and last season’s Cardinals team are good examples of where teamwork and hard work can get you. It’s looked at by the media as a rare feat – a team winning without a superstar, or with minimal input from their superstar – and it’s usually lauded. In the NHL, though? The very concept of not having large, marketable personalities is seen as a detriment. Hockey apparently has an “identity crisis.”

To fans of the game, this seems preposterous. We know what the sport’s identity is. Fans generally prefer having a solid team effort over having one superstar and an average season. Think about the backlash towards NBC and what was then known as Versus for over-hyping Alexander Ovechkin and Sidney Crosby every chance that they got. The most common complaint I saw and heard was a variant on “there’re other guys on that team!”

Thankfully Damian Cox has come forward and declared those days a thing of the past. Crosby’s time as a marketing tool is done due to concussion; Ovechkin’s is due to placing the individual over the team (or in this weekend’s case, over the NHL). Ovechkin’s decision to skip the All-Star game caused rumbles of discontent, the most common being concerns about how the league could market the game without a big name. The Hockey News dubbed it an “All-Star Weekend in search of a star.” The horror! One person has to stand out in the game!

Thankfully, that didn’t happen. Instead of constant focus on superstars that markets felt could be marketed to the average fan, the networks spread fairly even attention around all of the players. We got Carey Price’s shenanigans during the trick-shot competition. We saw Patrick Kane fly like Superman on the ice and shatter a puck. Zdeno Chara demolished his old record for hardest shot, and Scotty Hartnell spent most of the competition flinging #HartnellDown toques into the stands for promotion of his charity. Individual personalities got a chance to shine through, and that was pleasant to see.

That’s the league’s strong point. That’s how they need to market the sport and the NHL: individuals who make up a team. No one guy to put himself above the rest. Hockey’s a team sport, so promote it like that. Don’t focus on one or two superstars for every commercial; get some guys together and have fun. Remember the days of this?

Get back to marketing like that. Hockey has a cast of fascinating characters. Roll players, fourth line guys who no one knows but who have a personality as big as a house, superstars with a sense of humor – hockey has all of that. Utilize your strengths, and maybe next year people will stop worrying about how there isn’t a star in the All-Star Game. The other leagues can keep their Tebows, their LeBrons, and their Pujols. Hockey is much more than one person.