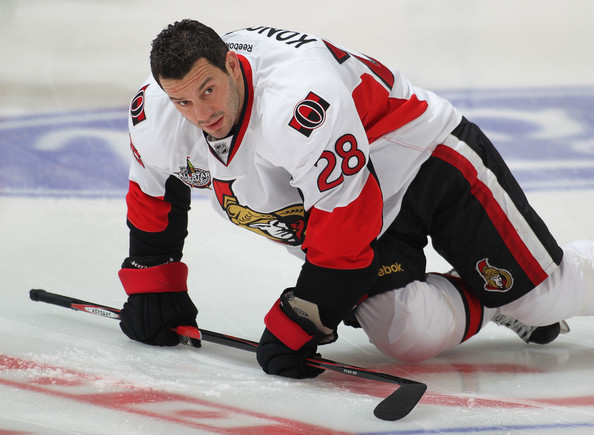 If you’re a serious fantasy hockey player you’re probably pretty familiar with Zenon Konopka. If you’re not, you might be wondering why we would dedicate an entire article to the forward from Ottawa.

Konopka is known for two things and two things alone – dropping the gloves and sitting in the box. For the knowledgeable fantasy player, Konopka is a legend when it comes to the PIM (penalties in minutes) statistic. While it might be a controversial aspect of the game, Konopka’s supremacy in collecting penalty minutes is truly one that must be appreciated.

So why are we spending time talking about a guy that has just 27 points over the course of 244 NHL games? Physical brutality.

Ever since Konopka emerged in the NHL during the 2005-06 season with Anaheim, the penalty box has been almost a second home for the forward. Seriously. Through his 244 games he has spent 852 minutes in the box for various penalties he has committed, typically five minute majors for fighting. Granted, Konopka hasn’t actually spent each and every penalty minute physically in the box but if he had the total would add up to a whopping 14+ hours spent in the sin bin.

With a majority of fantasy hockey leagues using penalty minutes as a scoring category, the objective being to accumulate the most, Konopka is an important asset. However, according to the numbers at Yahoo! Sports, Konopka is owned in just 11% of all fantasy leagues meaning that most owners have missed the boat.

You might be asking, why should I waste a roster spot on my fantasy squad for a guy that truly only contributes to one category? Simply put, Konopka dominates that category.

Zenon Konopka is to penalty minutes what Steven Stamkos is to scoring goals. He is that elite.

However, Konopka’s inability to contribute much in the form of offense has caused him to be overlooked in the bulk of the fantasy hockey world. Konopka’s career-high number of points is … (drumroll) … nine. When you roster a guy like Konopka, as I have in nearly every season since he has been in the NHL, you understand you are waiving offense from that spot on your roster.

To give you an idea on just how powerful Konopka can be to your efforts in winning your weekly matchup or climbing to the top of the PIM category, look no further than his averages. As mentioned above, in 244 games in the NHL Konopka has racked up 852 PIM. This averages out to roughly 3.5 minutes a game. Based on this average and a typical schedule of three games for his squad in a week, you can all but pencil in 10 penalty minutes a week for the fighter. Of course, as with any average, you will have times where Konopka will (surprisingly) go a couple games without a fight. On the other side of that average are the weeks where Konopka turns into The Incredible Hulk and sees numerous fights and misconducts, all but winning the category for your squad all by himself.

Currently, Konopka has the most penalty minutes of any NHL skater in 2011-12 with 168 – a total that is destined to rise.

It can be difficult to predict which skater will lead a given category in the NHL but the award for most PIM seems to regularly wind up in Konopka’s hands…or fists. In 2010-11, Konopka led the NHL with 307 PIM. The 2nd place finisher? Chris Neil with 210 – a difference of nearly 100 PIM. He also led the category in 2009-10.

Long story short, in two full seasons he has led the statistic by a healthy margin. He is well on pace to retain his title for a third-straight year in 2011-12. If your league uses PIM as a stat, you’d be foolish to pass on what Konopka offers. Add him immediately and stash him on your bench, using him a couple times of week to earn your squad the needed PIM they need to win for that week. By using him in a rotation, you won’t miss out on much offense while still enjoying the rewards of Konopka’s nasty temper.