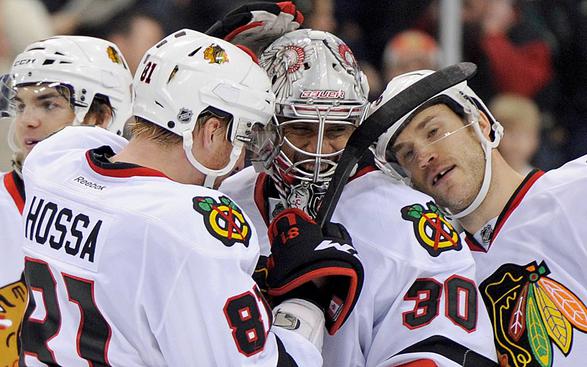 How did things get so bad in the Windy City? What will it take to get this club back on track in arguably the most difficult division in the NHL? Is a big change coming?

Chicago’s last regulation victory came on January 20th against the Florida Panthers. Following their 3-1 win over the Panthers, the idea of the Blackhawks going on such a downward spiral seemed laughable. The club is loaded with offensive geniuses both at forward and defense. Goaltending has been questionable but Corey Crawford and Ray Emery have combined to keep Chicago at the top of the pack.

Then came January 21st – a 5-2 loss to the Nashville Predators. While the loss seemed like a minor setback at the time it was the beginning of some of the worst times this club has seen in recent memory. This loss was followed with another loss at the hands of the Predators, this time by a score of 3-1. The rest isn’t pretty.

This is how Chicago’s streak boils down.

During their slide, Chicago has struggled to keep their opponent from lighting the lamp. Corey Crawford and Ray Emery have gone back and forth between the pipes, splitting time in a sort of patchwork effort that had appeared to be getting the job done until the team’s slide began at the end of January. Now all bets are off.

Dating back to their loss on January 21st, the Blackhawks have allowed 38 goals. That boils down to an average of 4.2 goals allowed in each of their last nine contests. Granted, this average is a bit skewed due to their lopsided 8-4 loss against Edmonton, but the fact remains that Chicago has been unable to limit their opposition.

It may not be fair to lay all the blame on Chicago’s goaltending, but the fact is it hasn’t been very good. Take a look at their stats for yourself through the team’s 57 games in 2011-12.

As you can see, neither goaltender has been very impressive this season. Neither man has given the fans any confidence and neither look like a goaltender capable of a long playoff run.

Chicago’s losses, just like their victories, are a team effort. The goaltending may be the point that sticks out but it isn’t fair for it to receive all the blame. The Blackhawks have failed to play complete hockey, often relying too heavily on their stars to carry them to a victory. Most nights the Blackhawks have failed to play solid hockey in each zone on the ice, either allowing too much space in the neutral zone or by forwards failing to come back and assist in disrupting the opponent. You name it and the Blackhawks have probably done it incorrectly during their losing streak.

We have acknowledged the bad. We know there is a problem here. So what can Chicago do to fix it?

The front office has already placed their vote of confidence in head coach Joel Quenneville, meaning a coaching change is pretty unlikely. Logically, this means the front office believes the problem lies with the players themselves, signaling a trade could in fact be the adjustment this team needs.

The trade deadline sits relatively close on February 27th, meaning Chicago will have to assess their situation rather quickly. The Blackhawks don’t have a ton of wiggle room under the cap which would mean that they would almost have to deal away a somewhat sizable contract in order to fit in any major, expensive acquisitions. According to CapGeek.com, the Blackhawks have just under $5 million in available cap space. While they could bring in a minor piece or two with this budget, a larger, more impactful trade is what this team needs.

This doesn’t mean you’ll see Marian Hossa or Patrick Sharp on a new team in the near future but it may mean you might see some of Chicago’s young prospects leaving the system. During the summer of 2010, Chicago named seven players that they had no intention of trading – Bolland, Hossa, Kane, Sharp, Toews, Seabrook and Keith. Given the limited options on the market, it may not make much sense to move one of these bigger names as the return likely wouldn’t be able to help the team’s 2011-12 efforts.

However, there has been speculation and talk that Patrick Kane may be the asset the Blackhawks need to deal. Jeremy Roenick recently stated that he believes the Blackhawks would be able to trade Kane for the upgrade in net that they desperately need. This opinion is pretty controversial in Chicago but the core idea is valid. Chicago has a wealth of offensive talent. They could use an upgrade in net. It doesn’t take a very bright mind to figure out that trading what you have enough of to get something you need would be a wise move, the question is just which player(s) can you part with.

Kane is likely singled out as he hasn’t performed at the level fans believe he should. Kane does have 45 points through 57 games but his scoring total of just 12 goals have fans concerned. Add in his reputation away from the rink and you have the making of a trade rumor.

I’m not sure where the change will come from but I firmly believe the Blackhawks would be wise to make a trade before the deadline passes. This team has a ton of talent but has some serious weaknesses that it needs to address. You’d have a hard time finding many fans in Chicago that believe this team can make a serious run at the Cup without a change in net.

Personally, I struggle with the notion Chicago will part with a marquee star in a market that currently appears to have so little up for sale, meaning a rather small return on their sale. I think if a change comes it will be with players not included in the “untouchables” list above and will include more role players and the team’s wealth of young prospects.

Regardless, I think you can chalk up Chicago as an active buyer with just under two weeks before the deadline passes.