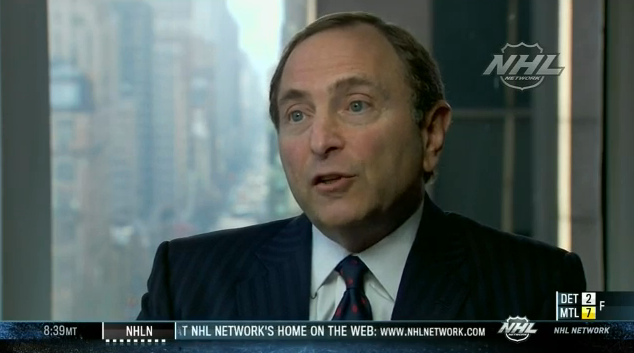 When I was a small child, there was a story that always seemed to reappear on my bookshelf. The book “If You Give a Mouse a Cookie”, penned by Laura Numeroff, allows us to catch a glimpse of what may happen if you give a mouse a cookie. For those unfamiliar with the story, a boy decides to give a cookie to a mouse after the mouse asks for one. Surprisingly, after the mouse finishes the cookie, it continues to ask for more things. The small creature becomes so caught up asking for things that it eventually tires the child out. Interestingly enough, that same story reappeared in the NHL Network’s recent interview with NHL commissioner Gary Bettman. Only this time, the boy had become a man and had absolutely no interest in giving the mouse a cookie.

If you haven’t seen the NHL Network’s recent interview, I suggest that every hockey fan should take a few minutes of their time to watch it. In the piece, you’ll see Kathryn Tappen ask Commissioner Bettman a wide variety of questions that include injuries, the looming CBA agreement, franchise movements, Tim Thomas, and the lightning rod that is Brendan Shanahan. And despite the entire piece being overly vanilla, it brings to light some of the few issues that the league needs to address moving forward. Everyone can agree that the National Hockey League is far from perfect, but it is slowly making progress.

When it comes to looking at the big picture, the easy thing for any writer out there is to openly criticize Bettman. However, I’m don’t agree with that school of thought. Putting it all on one man’s shoulders when there are plenty of people behind the scenes making sure the league sways a certain way is immature. But given that he is one of the highest executives, I still acknowledge the fact that he can still be held accountable for some of the issues that haven’t been solved yet.

Therefore, for the progression of the game, what does the Commissioner and NHL have to do?

The recent Alexander Ovechkin situation proved to be quite a dicey situation for the league. Instead of being disappointed with his decision, they should have supported his thought process. If you’re going to suspend a player for detrimental activity, you have to take away all privileges during the time of suspension. In essence, Ovechkin should have never been able to play in Ottawa because of his suspension. By allowing him to do so, the league acknowledges their efforts in trying to make quick revenue on a single name.

The mishandling of the Ovechkin situation lost credibility for the league. If they wish to continue their long-term financial success, they have to strive for building integrity in the eyes of the fans. If you suspended a player, he should be ineligible for all events during the time of suspension. Unfortunately, there seems to be a lack of accountability in the league.

The NHL cannot afford to have a work stoppage for the 2012-2013 season. League revenues are at an all time high as the game continues to gain steam from the Comcast business mergers with NBC. It would be an absolute shame if the NHL and the NHLPA took negotiations beyond the summer of 2012. The notion of agreeing to a new CBA is self-explanatory. It needs to get done.

3.) Increase the Suspension Lengths and Rate of Suspensions.

Perhaps the most thankless job in the league falls to Brendan Shanahan. The office disciplinarian is in his first year and came out of the gate with his foot on the gas. Since his preseason takedowns, he has shown inconsistent judgment and has yet to establish a firm grip on the league. If he (and the rest of the NHL) truly wishes to clean up the game, he needs to be more constant in issuing fines and suspensions. He also needs to increase the length of repeat offenders. I can’t help but to think of the Malice in the Palace brawl that took place in 2004. The NBA quickly put their foot down and made sure a message was sent. In likewise fashion – Shanahan needs to make examples of out players. The Matt Cooke suspension in March 2011 wasn’t enough.

In what could be considered their most pressing day to day improvement, the league needs to take a long look at the quality of the officiating once the season is over. On the biggest stage of the year, the 2012 Winter Classic, we saw the referees try their best to give the Flyers another goal to tie the game. For the dedicated fan, we continue to see missed or poor calls on a weekly basis. Maybe the league should consider strengthening the War Room in Toronto. At the very least, the room could be responsible for reviewing every single goal scored during a game – a big responsibility but not out of the question.