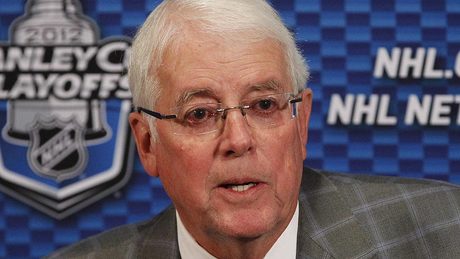 Poor Phoenix Coyotes fans have been jerked around multiple times in their team's long and drawn out ownership saga. You'll have to excuse them (and most everyone else) if they take the news that Greg Jamison has secured investors to help in his purchase of the Coyotes with a grain of salt. After all, this is the guy, with Gary Bettman, who stood up in a press conference to claim that the sale'd be done in a matter of weeks, not months.

With the sale of the Coyotes, you take what you can get, and apparently Jamison got investors to make up his $20 million shortfall. Just who are these investors? According to Mike Sunnucks, Jamison's not telling. Regardless, if these investors do exist, and they have faith that eventually they can break even in the desert, more power to 'em. This is an interesting opportunity for an investment if you're a multi-millionaire sports fan, and the investors have to be taking into consideration the fact that, as owner of the San Jose Sharks, Jamison made the team relevant in San Jose and an annual playoff presence.

Another impact this has aside from keeping the Coyotes in Glendale is that it more than likely will keep Shane Doan with the only franchise he's ever played for. He's been dragging his feet in this free agency process, even turning down an offer from a mystery team that'd pay him $7 million for four years. He's made it more than obvious that he doesn't want to uproot his family, and as free agency plods on it's becoming clear that this influx of cash to Jamison is what he's been waiting on.