Thank you Harrison Mooney, and thanks to whomever pointed this out to him: 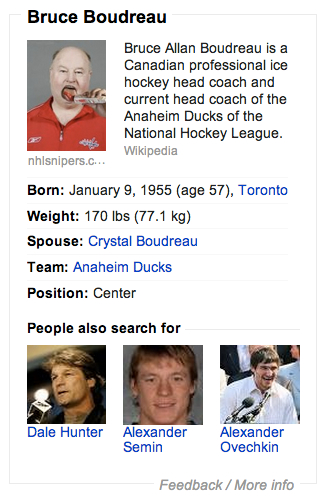 With Google's new and improved search interface, an informational box now pops up on the right hand side (it's been doing it for a few weeks, but people just really noticed it today thanks to a post on Gizmodo). The photo within the informational box comes from Google's image search on that person, though how they choose which one they're using is beyond me. Whomever decided that one should be Bruce Boudreau's is either a Penguins fan or just someone who thinks Boudreau's obnoxious. That doesn't narrow it down much, does it?