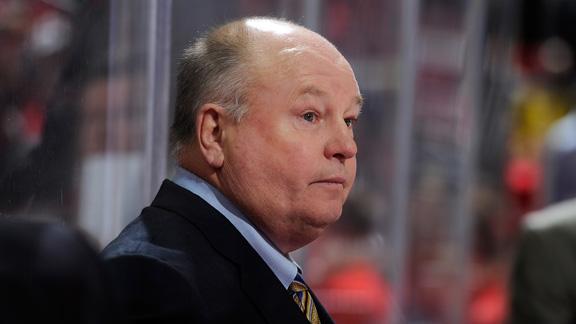 No one can ever dare accuse Anaheim Ducks coach Bruce Boudreau of being a shrinking violet. Loud, opinionated, and brash, he has a polarizing personality that is either love him or hate him (disclaimer: I tend to fall into the latter camp). He’s found recent employment, as fired and off-season coaches do, on CBC’s Hockey Night in Canada as a guest commentator. Boudreau spoke with CBC.ca regarding the recent spate of violence in the playoffs, and as usual, it’s uninformed claptrap. Here’re some highlights:

CBCSports.ca: The talk of the playoffs so far has been the fighting and hits the head and how it’s gotten out of the control. What’s your assessment to this point?

Boudreau:I don’t think it’s out of control, I think it’s what want people want. Hockey players and the sport itself is a really competitive sport. We build from the minute we start training in the summer for one goal and that’s to win the Stanley Cup. And that’s what everybody bases everything on. … It’s just when it comes to playoff time everybody is so ramped up. The media has ramped you up, the coaches have ramped you up, the organization has ramped you up to win the Cup. It gets highly competitive. Players go at it like they’ve never gone at it before. That’s the way it is.

So, according to Boudreau, the level of violence in the playoffs is ok because “it’s what people want?” People have been mind-bendingly vocal of their outrage of not just the violence, but the terribleness of officiating and punishments… because poor officiating and punishments cause violence to happen more often. I haven’t heard anyone say “Man, Flyers/Pens game 3… what a great display of old time hockey!” Even people who felt that game began that way saw that it quickly degenerated into a parody of that old saying “I went to a fight and a hockey game broke out.” I can’t think of anyone who was ok that Weber didn’t get fined. But nope, things like Raffi Torres’ hit on Marian Hossa was juuuust right because people demand and want to see stuff like that. Ok, Bruce.

CBCSports.ca: Then why do you think the fighting and heads shots have been huge talking points during these Stanley Cup playoffs?

Boudreau:Well, the social media and everything else. It’s all out there. You can’t move without anything being reported, that’s why. I mean if this was 1972 and they didn’t have cell phones or computers or anything else, you would’ve got a quick look on a highlight one night and that would’ve been it.

It’s the Twitters and the Facebooks and the Interwebz! No. People wouldn’t be discussing Raffi Tores’ hit around a water cooler without all of this newfangled stuff, and headshots were perfectly acceptable in 1972, and pigs are flying outside my window right now. Sorry, head shots weren’t — you just had more effective discipline, like giant scary men who would beat you into the ice.

Boudreau:I think you’re trying to make something at of nothing here. Players don’t sit at home and say, ‘well if he didn’t get suspended I can do it.’ In hockey, things happen in an instant. It’s not a premeditated type thing, where you go and see if I can get away with hitting his head into the glass. To me it happened in an instant. I don’t think given that situation again, Shea Weber would do that but I mean it was there and he did it.

I know people who personify what Boudreau just tried to claim didn’t happen. Even if the hits aren’t meant to be dirty, the non-suspension on Shea Weber’s the new go-to excuse. He might be the only person who’s stated that this thing is just “something over nothing,” which is hysterical to me when I picture what his response’d be if someone did the same thing to Corey Perry that Weber did to Henrik Zetterberg.