This Week in Terrible Hockey will be a weekly feature that points out a particular play, game, player or franchise who has just done a terrible job at professional hockey.

This week in terrible hockey, I’m going to take a look at Steven Stamkos’ hat trick clinching power play goal from Friday night against my very own Chicago Blackhawks. Check it out below.

Boy, Stamkos had quite a bit of space there, huh?

So, we’ve all seen that Stamkos one-timer from the dot about a bajillion times in the last year which means you’re probably wondering: How did he get so wide open? Let’s break it down.

This is where the problems start. The puck was dumped and chased in by Vincent Lecavalier. Toews followed in the dump-in to support pursuit down to the goal line. Brent Seabrook is manning the far post for the moment. Nik Hjalmarsson ignores playing the puck completely and goes to step into the Lightning player. Not only does he fail to elimininate Lecavalier, but also allows the puck to be progressed behind the net. If Hjammer’s stick is on the ice or he heads to cut off the behind the net pass instead, he may have ended the chance right there. 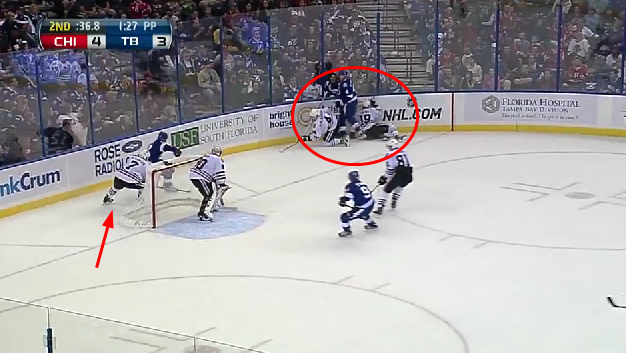 This is what we get instead. Toews loses an edge and falls in the corner, preventing him from getting into passing lanes towards the point. Hjalmarsson also goes down while trying to take out Lecavalier, leaving the strong side of the net unoccupied. Seabrook recognized that Hjalmarsson was unable to prevent the puck from progressing and therefore continued to chase Ryan Malone behind the net, now leaving the weak side of the net vacant. One could certainly argue that Seabrook should have laid up and let Malone go to cover the weak side of the net and not have three of their four players below the goal line. Marian Hossa is in the slot, stuck being responsible to try to cut off passing lanes to three different players and is kind of stuck in no man’s land, but this is hardly his fault. 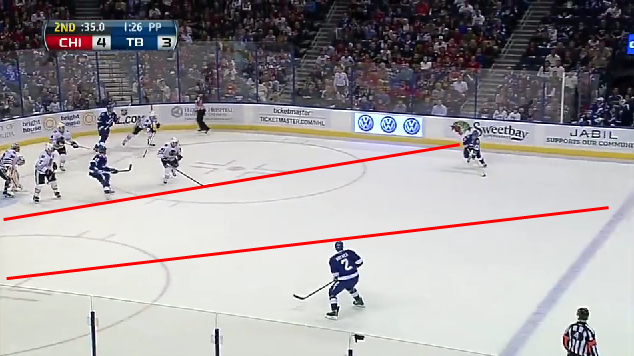 Pictured: The Grand Canyon, a.k.a. St. Louis’ passing lane. Not pictured: Stamkos lurking near the weak side dot.

Now this is where the past mistakes come to realization. Malone, due to Toews & Hjalmarsson both going down in the corner and not able to get over, has tons of space to feed St. Louis at the strong side point. Also due to Toews & Hjalmarsson going down, you had Seabrook & Hossa playing on the strong side of the ice, leaving both Eric Brewer (at the point) and Stamkos (hanging out in his office at the weak side dot) with space to setup a tea party for 50 people. Seabrook fails to recognize that Stamkos snuck back to the weak part of the ice, unmolested. 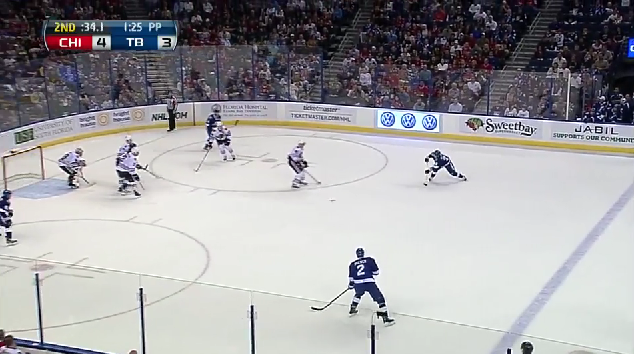 The fake slapper into a pass that St. Louis pulls freezes Hossa just enough to keep him out of the passing lane.

And boom goes the dynamite.

Again, in my opinion, if Hjalmarsson ignores playing the body, getting to the boards to attempt to cut off the behind the net pass or even just keeps his stick down as he takes the body on Lecavalier, the play may have been broken up.

The amazing thing, to me, about this play is how quickly it developed. Under five seconds from the time Hjalmarsson goes to take the body until the puck is in the back of the net. Exactly why the Lightning power play is scary and dangerous at any moment.