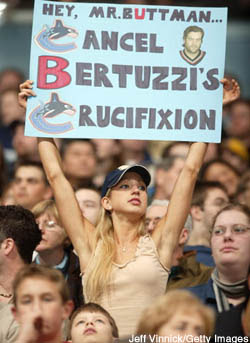 Oh beautiful British Columbia, how you are Canada’s paradox. You are the land of the Super Natural. I’ve seen your majestic mountains, stunning ocean and beautiful urban parks. You have it all West Coasters; Gentle winters, liberal politicians, booming film industry, affluent citizens and a commendable appreciation for CFL. You even had the Olympics. You just got to show off all your neat stuff to the world. Well, it was the Winter Olympics, but you take what you can get, right? It’s more than Toronto ever got. (Sorry Pan Am Games, no one honestly cares if you live or die. The people who have to care are getting paid. And you can bet they’re finding a way to skim or scam. People who are supposed to cover the games are going back to college to be a vet tech so they don’t poison their family names by being associated with the sport equivalent of a dollar store sympathy card).

At the end of the day, Vancouver is a perfect symphony of urban and natural environments. It’s a beautiful city and always ranks so high on those livable city lists written by people who live in countries with nice social welfare nets and fancy minimalist furniture.

It’s not without its problems. I mean, the housing prices are amongst the highest in Canada, which is great, because it means all those junkies on Hastings can sleep outside and tourists can check them out with ease. It’s got one of the best skid rows in Canada. By best, I mean it’s as scary as Canada gets without being in a bar in Kamloops at 2.a.m. with a handful of Canadian Tire money.

Why does everyone think your hockey team is a piece of shit?

Mark Recchi came right out and said it last week:

Don’t worry Vancouver. Kevin “Don’t call me Dangerfield” Bieksa came back with this snappy one liner:

“Isn’t he retired? What’s he doing? Tell him to go play a round of golf or take a nap. Why is he chirping us?”

Way to go Kevin. All you missed was the “over the hill” jab and you could have had yourself the retirement coffee mug cliché trifecta. No wonder people hate them. That is a pretty stupid thing to say.

Now on Sunday night in Vancouver there was an incident involving Ottawa Senators forward Jesse Winchester and the Vancouver Canucks. A seemingly harmless play was made potentially disastrous when Alex Burrows decided to open the bench door as Max Lapierre delivered a hit on Winchester, sending him through the door and into the bench. This was a completely unnecessary and potentially dangerous play that has no place in hockey. It raises questions about the commitment of NHL players to limit unnecessary injuries and showcases a lack of professional respect. Sure the Canucks bench had a good laugh and Lapierre smiled away probably saying clever things to Winchester about him being a plug. I don’t blame him there. Winchester, truth be told, is a plug on a meddling team who probably wouldn’t have a job in the NHL if it were not for bottom feeding teams requiring depth players. It’s guys like him that draft lottery chasers gravitate towards in order to give them an extra push in the standings when it matters.

This incident came days after Recchi called out the Canucks. Seems like a perfect time to revisit the hockey culture that Vancouver has become renowned for.

Now I don’t personally have a problem with the team but I’m interested in exploring the root of Canuck hate. It should go without saying I have a completely different perspective on this than someone, a NHL player like Recchi, who actually knows these guys and has played against them. I’m interested in the fan hate for Vancouver based on what we see in the streets, in the papers, and on television.

The Canucks started out in 1945. They played 25 seasons in the defunct PCHL/WHL hybrid beast that resulted in Vancouver and Buffalo being awarded franchises in 1970. They won two championships in the PCHL and four in the WHL, including a championship in their farewell season.

I guess they had outgrown their old nest. So they moved on. I suppose this is where it starts. The Canucks have quietly gone about establishing one of the biggest losing traditions in the NHL. Here’s how Stanley Cup-Blocking has shaped up:

Possible source of hate: Canucks are losers. Everyone likes to pick on a loser. Are they losers for life? Based on the past 41 years of hockey, my answer would be yes.

Maybe this Vancouver hate has something to do with past personnel. The team has employed some of the biggest scumbags the NHL has seen over the past 15 years. They are truly despicable characters that really blur the line between villain and human being.

Matt Cooke headlines this group of despicable talents. We can all thank the Canucks for giving this guy nine years of service time in their organization and developing a bona fide NHL pest of epic proportions. Not since the days of Ulf Samuelsson has the NHL seen such stellar execution of the hit and run method. Check out some of these comments left by common folk on the hockeyfights.com page from the Cooke knockout by Evander Kane:

“Last minute, Karmic justice from the hockey Gods. Couldn’t have happened to a nicer guy.”

“I could watch this all day. Cooke deserves to be KOed this bad and then some for his ***** hit on Savard. Thank you, Mr. Kane, for dispensing justice! This could be KO of the Year!”

“The most satisfying KO that I have seen in some time. No one is more deserving of a jaw shattering shot than Matt Cooke. He asked for it, and he got it.”

This is also the team that raised homegrown talent like Jarkko Ruutu. You know, the biter, the diver, the instigator. He’s a man by many names usually prefixed by a four letter word. The Canucks also boast a current smorgasbord of irritating players like Alex Burrows and Maxim Lapierre. You may remember Lapierre from all those times he didn’t fight. Lapierre has also continued the long standing tradition of biters from Vancouver. He’s a decent offensive player who knows his way around a hockey stick. They’re easy to detest and make watching the Canucks insufferable. His play reminds me of his voice at the 1:20 mark in this video.

Possible source of hate: Intolerable pests who are more famous for their on ice antics than their hockey skills. Who says NHL talent pool is too diluted these days anyways?

The Canucks reputation of diving became so serious the NHL had to step in during last year’s playoffs. Here’s a great piece by a man who can barely dress himself when he appears on Hockey Night in Canada, Eric Francis of the Calgary Sun:

“Through our supervisors, we warned all the teams not to embellish. It’s becoming rampant, and we’re going to start calling it. We’ll ramp it up next round. You may not like it, but we’ll point out the guys who we feel will embellish calls.”

Weird. I wonder who they were talking about?

Dan Boyle comes clean to Sportsnet in this interview:

“Their heads are going back like they’re being shot with a gun,” he said of the reaction by Canucks players when they’re met with a body check. “Hopefully the refs see it, most of the time. They got one right in the end at least, though unfortunately I had to go with him.”

Even Kevin Bieksa pleaded with his own teammates to lay off the diving:

“I know guys will do whatever it takes for a power play to win a game,” Bieksa said. “But sometimes they’re crossing that line of integrity. I think for the better of the game, for the good of the game we need people to stay on that line and not cross it, and not dive and exaggerate for calls.”

Possible source of hate: Jeopardizing the integrity of the game.

Then there was Big Bert. The man who dragged the image of our national game through the compost heap and into the back of a white van parked outside a Hull strip club. He brought the ugly to American news networks and soured casual bystanders on our violent game. This incident has been done to death, but the one thing that continually bothers me about the incident is the cheering by the Vancouver fans during the incident. The soundtrack makes the moving pictures even worse. A group of bloodthirsty Romans applauding a suckerpunch. If only Matt Cooke was a better fighter and the incident never occurred. I guess that’s what happens when on ice justice is placed in the hands of a criminally ineffective Cooke. At this moment, Vancouver became the bulging cyst of hockey around the world.

Possible source of hate: Being shamed across the world.

Then there was the reaction to the Presidents Cup winners farting the bed so wet in the Stanley Cup finals, it took the force of police and firefighters across Vancouver to soak up the stench. Yes, the great riots of 2011. It was another shameful moment in hockey history that was again broadcast around the world. BBC had a take, and so did Al Jazeera. Everyone who had a computer surely scanned the headlines that morning and saw that Canadians were rioting over hockey. Again the game was shamed in the international media by the fine folks of Vancouver. Great, thanks Montreal for the lessons, Vancouver just upped the ante. Your move.

Perhaps it’s because Vancouver is incapable of winning anything hockey related unless it’s an individual trophy or a meaningless regular season award. The only time the city has known hockey success is when the rest of the country sends their best players to do the job properly as they did during the 2010 Olympics. It’s interesting that no riots broke out after this victory. Perhaps it’s because the citizens of Vancouver had either fled the city during the Olympics or were too busy volunteering to be bothered to torch cars. I’m just thankful the rest of the world showed up to keep things under control.

Possible source of hate: Fans behaving as badly in the streets as the players did on the ice. Oh, and more international shame.

More recently, but equally ugly, Ryan Kesler exposed himself in ESPN Magazine’s Body issue. Kevin Bieksa even jokes during this TSN interview, “What did you say earlier? We’re the most hated team in hockey? This isn’t going to help it.”

No kidding. Perhaps he has the body of a Greek God, but he happens to have a nose that would make an aardvark blush and the arrogance of a defiled politician in denial. You’re right Kevin, this does add fuel to the fire.

Looking at the cases described above, the Canucks existence can best be described as miserable, destructive, and shameful. They have hurt the game on and off the ice numerous times and no amount of public apologies scrawled on plywood can repair the damage done by this club and their supporters.