How Great is this card?

Forget for a moment that it’s Jaromir Jagr. I’m going to assume that since you’re reading a hockey blog you are familiar with him. He seems to have put together a nice career. Good for him.

Of course it is worth mentioning at the time this card came out Jagr had finished just his second season, and did so with 32 goals and was just 1 point shy of being a point a game player. At this point he was a two time Stanley Cup champion and would be on track to set a new career best for goals (34), assists (60) and obviously points (94). All numbers that Jagr would continue to build on until his career year in 95-96 season in which he tallied 62 goals, and 87 assists for 149 points still finishing second in the league and on his team to Mario Lemieux. Since that 95-96 season no one has come close to reaching those point totals. In fact Jagr was the closest in 98-99 when he had 127 points.

But that’s enough about Jagr, there is so much else going on with this card.

In the 92-93 Hockey set Upper Deck decided it would be a great idea to include a collection of pictures of star players standing in front of their lockers giving you a bit of insight into their personalities. Chris Chelios’ card had him there with his kids. Doug Gilmour stood there looking bad ass in a leather jacket. Ray Bourque had his golf clubs and is dressed like a Podiatrist and Denis Savard was holding a picture of his horses. Other players like Jagr and Gretzky were simply there looking awkward.

Of course the picture begins and ends with the trademark Jagr mullet. The way that Ryan Smyth’s hair has defined the past decade of hockey hair, Jagr’s owned the 90s. This card isn’t even the best card for Jagr’s mullet. For that you’d want his All-Star card in this same set (he also has chipmunk teeth in that photo.) Jagr’s hair was great but there are so many other things worth noting.

For instance, his jacket. One of the items that will define the 90s for me will be suede sleeved promotional jackets. They simply owned the early to mid 90s. I’m guilty of owning a pair, but Jagr has the crème de la crème with this Upper Deck jacket. The deep green also defines the era and at the time we would have all been in marvel of what a cool look this was.

The next thing worth noting are Jagr’s shoes. They appear to be tassled duck shoes. Again pointing out how fashion forward Jagr was in 1993. Of course duck shoes would soon fall victim to the rise of Doc Martens and unfortunately Jagr would not model these in future Upper Deck sets.

Also quite noticeable in Jagr’s attire is the high beltline on his bright blue jeans to go along with his plain Gap shirt. Jagr looks like he’s all gussied up for a Bell Biv Devoe concert.

So all kidding aside, this card is awful, but it would be a concept that Upper Deck would continually bring back especially in their Be A Player and Collector’s Choice Series. Arguably the concept was perfected by Topps in their Stadium Club sets, as nothing beats Rob Zettler trying to look cool on his motorcycle. 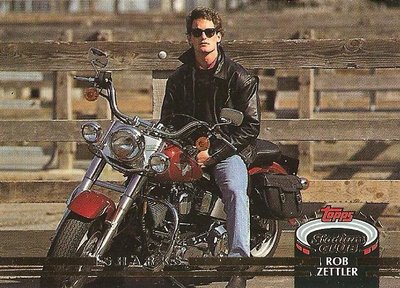 As for the Jagr card it’s not much of a hockey card, but I still suggest you pick it up for $.99 on Ebay. At some point you’ll attend a party with a 90’s theme and you’ll need a blueprint for your costume.