Happy Friday everyone. I know Friday’s can drag on and by the end of the day your brain wants nothing but a cold beverage and some mindless visual stimulation. This being the internet and all, I can only help with the visual stimulation. Here are some eBay puck finds and at the bottom of the post, a vintage hockey fight. It might only burn five minutes of your work day but it’s five minutes you won’t have to spend thinking about how close the weekend is. Just so we’re clear and no one thinks I’m running some sort of a racket, none of these are my property. They all came from the wonderful eBay vendors around the world. I receive no compensation whatsoever from these vendors and hopefully they aren’t pissed that their items ended up on this list. I guess any publicity is good publicity, right? If you end up buying anything from these lists please send us an email at puckdrunklove@gmail.com and include a photo of your new puck find. Here we have it… 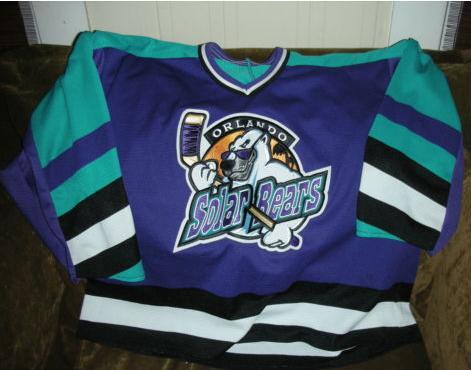 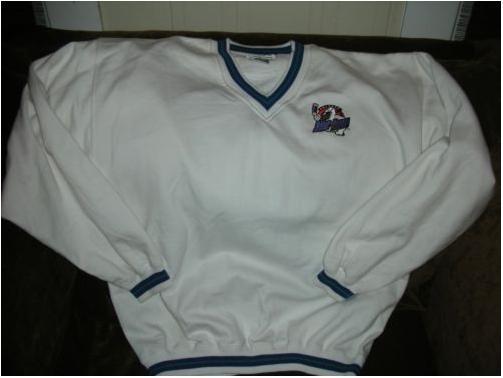 This might possibly be one of the worst hockey jerseys ever created. I have never seen a jersey with more primary colours than I have fingers on one hand. This makes an appearance only because of the novelty of owning such a horrible jersey. It looks like something you’d find in the lost and found box during a roller hockey tournament in Vegas. It’s also pretty sweet that you get a “rare” sweater to go along with it. It looks like it’s in pretty nice condition too. This might be because there is not a single person on earth, with the exception of those jacked cartoon characters who say, “Which way to the beach?” who could pull this thing off. The waist is just so disproportionate to the shoulders that you would have to be an Olympic rower from the Iron Curtain to be able to wear this properly. I imagine this would bother clients/father/friends/marshal if you wore it to a nice golf course. 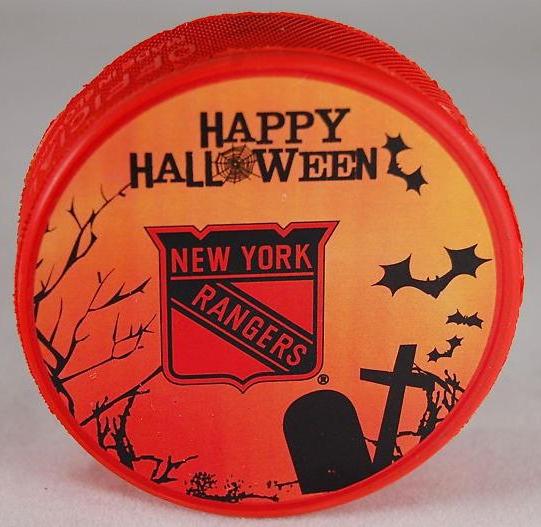 I know Halloween is over but this was too good to pass up. You can now relive nightmarish seasons from years gone past again and again with this wicked hockey puck. I don’t know if it glows in the dark but judging by the colour of it, you couldn’t miss this thing in the darkest depths of hell. Imagine the road hockey game potential with this bad boy. You thought black light bowling was cool? Just try taking a slapper with this in the dark and wait and see how much fun you have. If you don’t live in the NY area, I’d avoid putting this on display to the public next Halloween to save yourself from cleaning up egg and such the next morning. 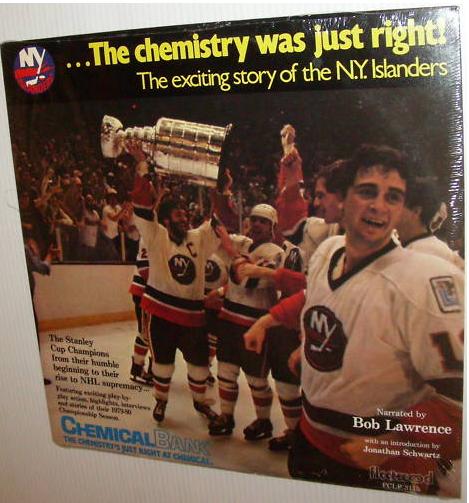 You might as well call this the soundtrack to Studio 54. From the listing, “Narrated by Bob Lawrence with an introduction by Jonathan Schwartz. The Stanley Cup Champions from their humble beginning to their rise to NHL Supremacy.” Impress all your friends with this collection of party anthems. There is no better way to set the tone for a wild night than with the graceful descriptions of a former NHL dynasty by Bob Lawrence. The guy might as well have advertised this as a party in a sleeve. 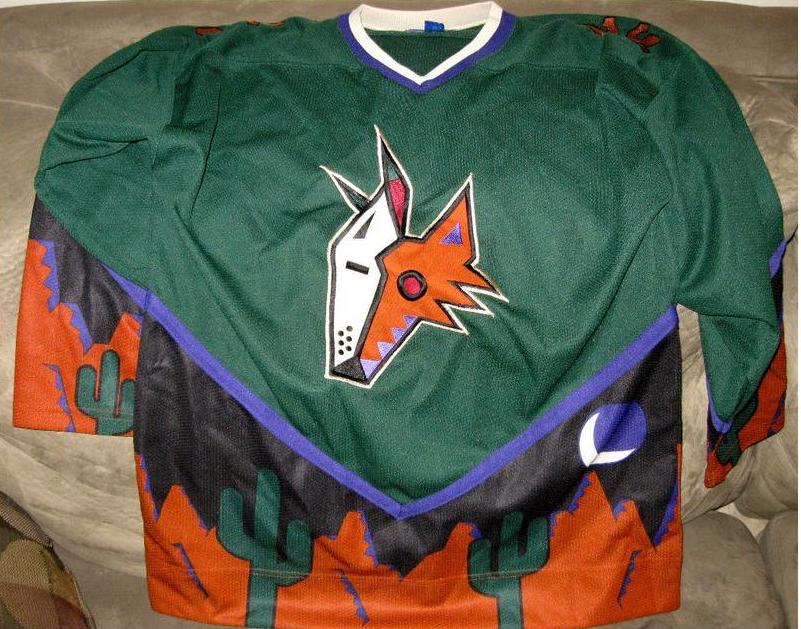 Do you remember that Simpson’s episode where Homer eats the spicy chili and goes on a magical desert voyage where he is met by a Coyote? Yeah, that’s the inspiration for this jersey. It’s a youth XL but you know how hockey jerseys are, this would fit someone who wears a size medium t-shirt with no problem. Not sure how often these come around, you’d have to think quite often, but at this price it’s a can’t miss. The price is right for a recession Christmas gift. This is pretty horrible, but I can’t stop thinking that if it were stretched over canvas and hung in a small gallery, the price would be exponentially higher. Maybe this is your gateway into the art world? 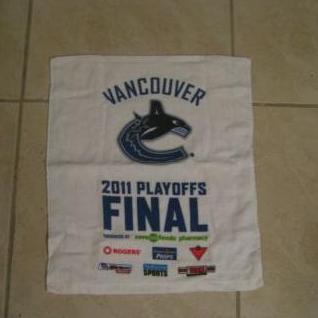 This is an incredibly rare find. These should be considered artifacts. These towels are the only objects to survive the Vancouver Riots of 2011. It’s amazing that these were not burned or wrapped around fists and used to smash windows. What a find. I hope they ship with archival glass. 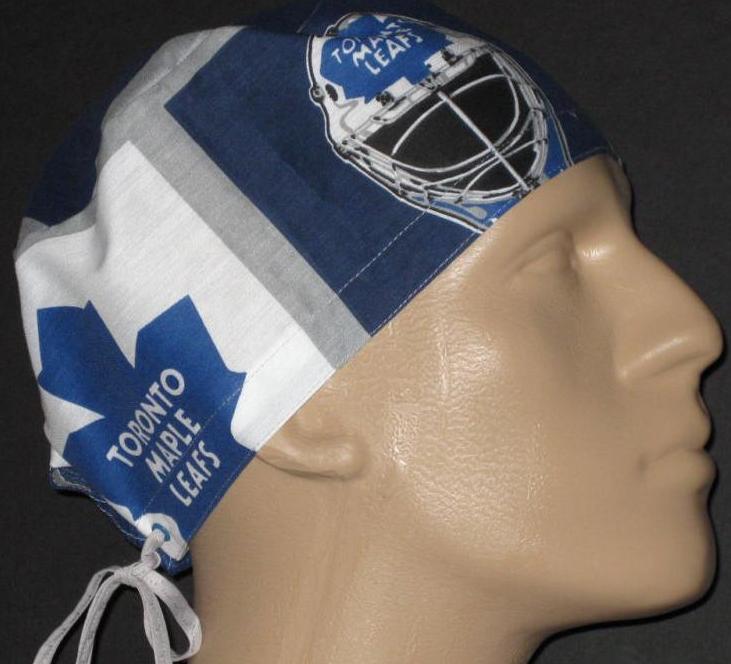 The official scrub hat of Brian Burke’s concussion specialist. Remember, it’s a choice to wear this. 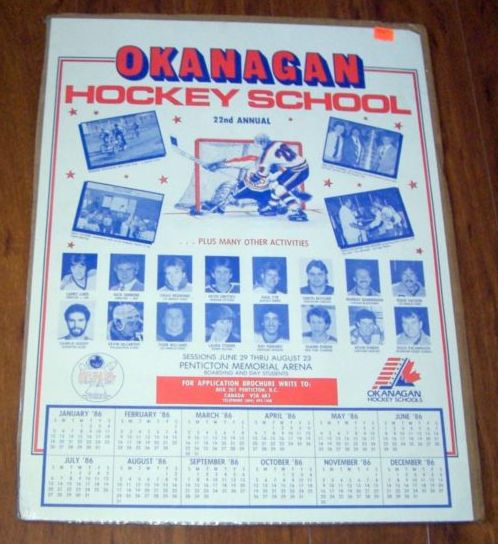 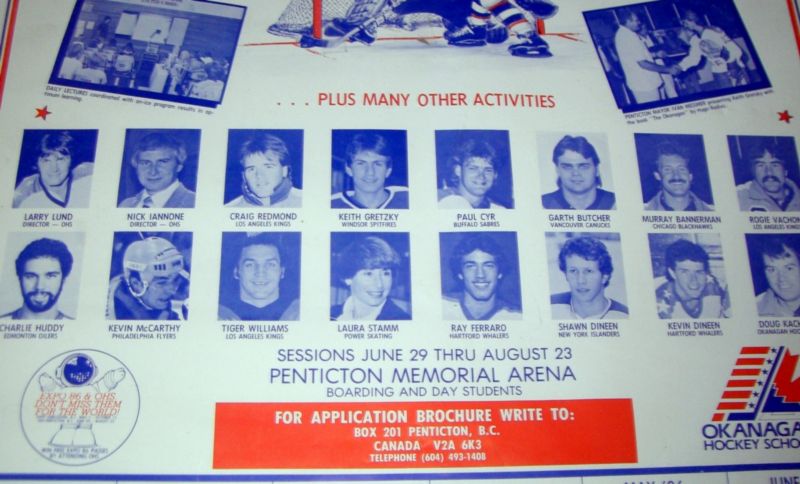 This is actually pretty amazing. A great hockey poster featuring former players such as Charie Huddy, Tiger Williams, Ray Ferraro, Kevin Dineen, Garth Butcher, Rogie Vachon and Keith Gretzky. Do they even have hockey schools that are as amazing as this anymore? What a collection of moderate talent. I think this is pretty neat. I showed it to the lady and she immediately dismissed it. I guess that means it can now be yours. This would look great in a basement or be an excellent source of contention between you and your spouse if you decide to hang it somewhere prominent. This poster measures 18×24 inches and would be easily framed. Description says it’s in great condition. Make it happen. 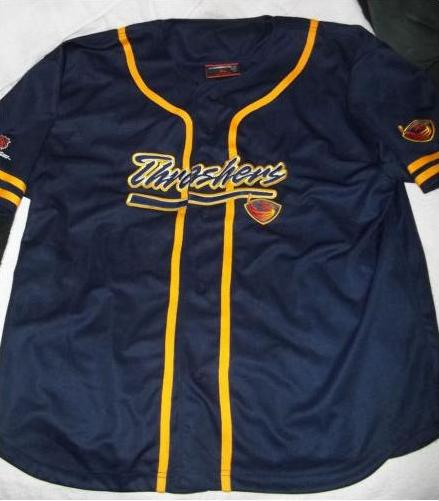 Paging Puck Daddy Jersey Fouls. Now’s your chance to own this wonderful keepsake from a defunct NHL team. Who says the Thrashers didn’t try to connect with their fanbase? I guess this a ironic since this year the Braves choked as bad as the Thrashers business plan.

Anyone have any idea about this one? The listing says it’s a rare throwback alternate. What’s it an alternative to? A normal hockey jersey? The description also says it would make a great gift. It sure would, if you have someone in your life that you secretly hate who wears basketball shorts whenever there’s an opportunity. This is an absolute mess of Charles Wang proportions. I wonder if the lister got it wrong and it’s actually supposed to be a pet jersey. I could see a Great Dane being forced to wear this then biting their owner the next chance they got. Other than that, this is probably best left to the archives of eBay duds. 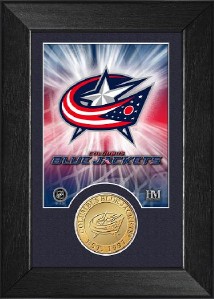 Now’s your chance to play the role of Blue Jackets General Managers Doug MacLean and Scott Howson by flushing away your assets on worthless novelty items! If you buy this, you might as well list Columbus Blue Jackets GM Co-Op Student on your resume.

Larry Robinson vs. Mike Milbury aka The Big Bird vs. Hockey Night in Canada Turd. After seeing this fight maybe we can all understand why Milbury thinks the way he does? Enjoy your Friday.