One of the things you might hear the most when you’re watching a hockey practice is the coach repeatedly saying to play to the whistle. This week we saw a player take those words to heart by scoring the game winning goal with only .1 seconds left in the game. Lets take a look at what happened during the last few seconds.

On Saturday, December 17th, the Rangers rolled into Phoenix to take on the Coyotes in a primetime match up. The first period saw a tally from each team as Marian Gaborik scored his 16th of the season while Lauri Korpikoski tied it up with his 8th of the year. In the second, the Coyotes gained the edge with a goal from Cal O’Reilly in the last minute of play. Down by one going into the third, Gaborik scored his second goal of the night right out of the gate to tie it up. As the game was winding down, the Rangers found themselves in the offensive zone with just a few handful of seconds left to play. At the start of the play, we see the puck float to the nearside corner with both the nearest Rangers tied up. The rest of the players on the ice are floating in on the play: 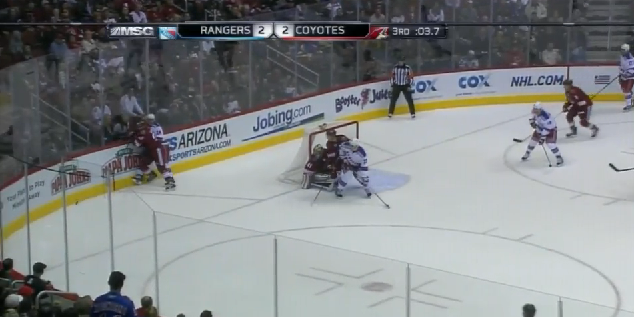 Rangers defenseman Ryan McDonagh gains possession of the puck with 1.7 seconds left. In desperation, he throws the puck to Richards who is almost on the edge of the near face-off circle. 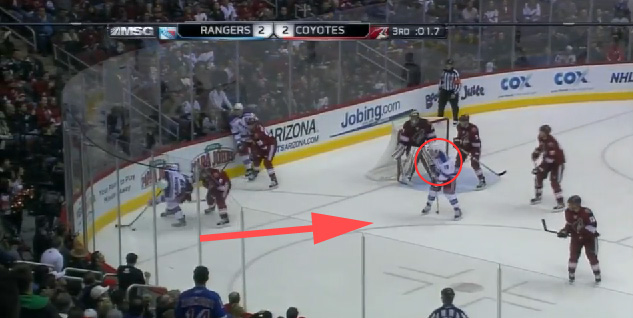 When Richards touches the puck, he whips it toward the net hoping to get a lucky bounce. The Coyotes player who is supposed to be covering him, Martin Hanzal, over skates and is now behind Richards right shoulder. The supporting Coyotes player, Keith Yandle, is trying to block Richards’ shooting lane while standing up. 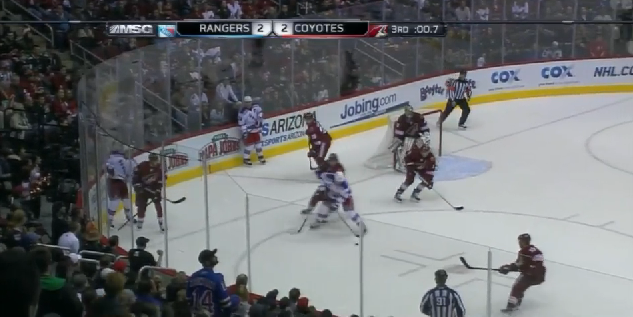 Yandle finally goes down on one knee but does so while sliding to his left, thereby taking away the passing lane to a Ranger player that is ready for the one time in the far face-off circle. By that point, however, Richards has already shot the puck to the net with his backhand. 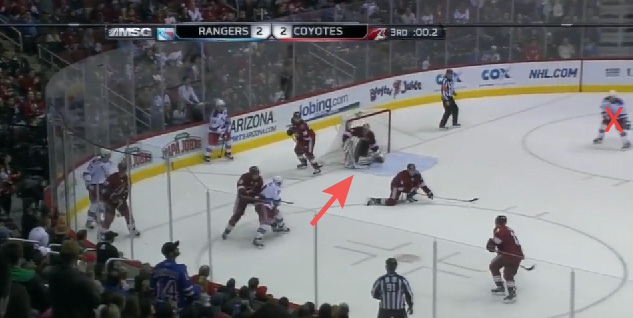 In the final moments, we see the puck find its way inside the net past Mike Smith on the far side. With Smith hugging the post on the near side, he leaves the possibility of a shot on the far side. After video review, it was determined that the puck did go into the net with time left on the clock. Therefore, the Richards shot is a good goal. Game over. Tough break for the Coyotes.

Put this together and this is what you’ll see:

Game Notes: Rangers forward Mike Rupp was back in action on the 4th line after battling a knee injury. He logged 8:41 minutes in 12 shifts and was tagged with a roughing penalty in the first period.

For those wishing to get a behind the scenes look at the goal, tune in to this week’s HBO 24/7. The Richards goal is surely to make the footage cut.