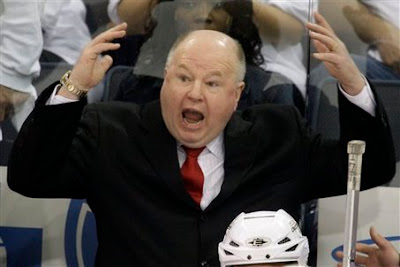 We all have a lot to be grateful for – I hope to have a fun time tonight at the game. I hope you will too – I hope we play well and that we win; for you our fans. Should we win this evening; we would join other division leaders with 12 wins.

It ain’t that bad; it isn’t as good as we want. I have empathy.

Thank you for keeping it all in perspective. Go Caps! ~ Washington Capitals owner Ted Leonsis via his Ted’s Take blog

Excitement! With all due respect to Davis Payne, the 2011-12 NHL season has its first high-profile coaching casualty!

Considered one of the favorites in the Eastern Conference, the Capitals started the season strong with a 9-3-0 record. However, in their last ten games, they’ve struggled going 3-6-1 and moving them into second place in the Southeast behind the division leading Panthers.

While recent losses — 6-3 to the Rangers and 5-1 to the Sabres — may have sealed Boudreau’s fate, recent decisions — benching goaltender Tomas Vokoun for the first regular season game; making Alexander Semin a healthy scratch against the Phoenix Coyotes; and not utilizing Alex Ovechkin in a last minute of a game in which his team down one goal and the goaltender was pulled for an extra attacker — have raised some eyebrows and some ‘alleged’ player dissention.

Ultimately however, Boudreau’s inability to get his team over the playoff hump — a record of 17-20 (.459%) — has been compounded by his inability to the team’s highly skilled Russians to play with concerted effort in all three zones. Until this season, scoring has never been an issue for players like Ovechkin or Semin so when these players are exhibiting the same bad habits but aren’t contributing offensively, they’re inevitably going to draw the wrong kind of attention to their play.

“I don’t mind saying Alexander Semin’s name, because he’s one guy who has so much talent he could easily be the best player in the league and just, for whatever reason, just doesn’t care.

Nevertheless, it’s been Ovechkin’s aloofness and lack of production that has been more disconcerting and has many pundits wondering ‘what’s wrong with Alex Ovechkin?‘

“It’s not going very well for the Washington Capitals, and it looks like the tension is starting to mount,” Hockey Night in Canada’s Mike Milbury said last Saturday on the Hotstove segment. “I mean, what are you going to do with a Bruce Boudreau-Alex Ovechkin conflict. It’s clearly there … he’s not playing with any kind of inspiration, he seems to be not into it at all, body language says frustration, body language says, geez, I don’t know where to go or how to set this up. This is a mess.

This guy is having trouble, and I’m not sure exactly what the answer is, but I know whatever they’re trying right now isn’t working.” ~ Mike Milbury

So the 2007-08 Jack Adams winner leaves the Capitals with a career coaching mark of 201-88-40 and his winning percentage of .672 ranks ranks him third all-time behind Tom Johnson (.738) and San Jose’s Todd McLellan (.678%) and former Capitals captain Dale Hunter replaces him.

After years of being rumo(u)red candidate for a variety of NHL head coaching positions, Hunter leaves the OHL’s London Knights to return to a Capitals franchise that he played parts of 12 seasons for.

According to the Associated Press,

The 51-year-old Hunter played for the Capitals from 1987-99, the last five seasons as team captain, and is one of four players to have his jersey (No. 32) retired by the franchise. He played 19 NHL seasons and is the only player in league history with 1,000 points and 3,000 penalty minutes. His career total of 3,563 penalty minutes ranks second all-time.

Hunter has coached the London Knights of the Ontario Hockey League for 11 seasons, compiling a 451-189-23-24 record. He became the fastest coach in OHL history to reach 300 and 400 career wins.

More importantly, Hunter’s the kind of tough love kind of coach who obviously will do anything it takes for his team to win.

Keep your heads up in practice boys.