A couple of weeks back I wrote an article about some players to avoid on deadline day. This time around I am here to write about some players that can provide some help for fringe and not so fringe teams. Contracts filled with value are the name of the game and these players have demonstrated their value in a multitude of ways. 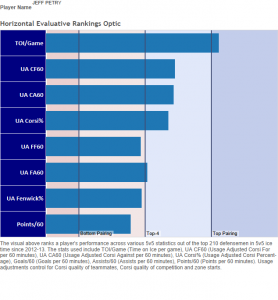 Petry’s name was bandied about last year and always seems to draw interest due to his numbers on a poor Oilers team. He has 19 points on the year with mostly first pairing minutes, he has been seen as a prime candidate to be poached for a low price and only a 3.1 million dollar salary. The problem with this thinking is now that Andrej Sekera has been moved for a high price, the market for a Petry has been set a very high level. His numbers despite being on a bad team will have many teams salivating come Monday but will the most recent moves prove that the price is too high? 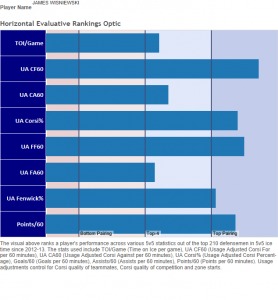 About a week ago this wasn’t even a player on anyone’s radar but alas a lot can change in a short period of time. As you can see on the chart, Wisniewski’s numbers are elite and it is only in a top four role. Matt Souva over at Buckeye State Hockey has taken a look at Wisniewski in regards to others in the league and can be a steal at 5.5 million (did I just say that?). Teams that are in need of an offensive defensemen will get a player firmly in the upper echelon of all defensemen, will the price be too high for a player with this track record and term? 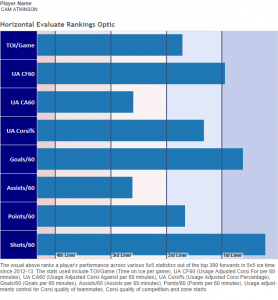 You will notice a trend here that a lot of players that are being discussed around the Blue Jackets are valuable, valuable assets. Atkinson will be a restricted free agent after this year and will be due a substantial raise after making only 1.15 million this year. I have written in the past about Atkinson and how he is consistently inconsistent, you know what you will get out of Atkinson, a half a point per game player regardless of his line mates. Adam Gretz of CBS Sports wrote a great article about the myth of Phil Kessel being inconsistent, when in reality his production is in line with the top players in the league, while not the same, Atkinson is still in the top 60 of G/60 played in the past two years. His production is nothing to scoff at and will be a tough player to gauge for the Blue Jackets if they do decide moving him.

Source says #Blackhawks have significant interest in Cam Atkinson, as well as Antoine Vermette. 1st-rounder likely the asking price, though. 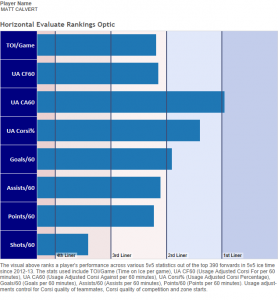 Calvert is the last person of the Blue Jackets triumvirate and also brings an interesting value for prospective teams. Like Atkinson, he is a RFA that is due a small raise from his current sub-million dollar contract. Calvert has seen time in the top six for the Jackets and has produced at a middle six rate in the minutes given to him. Calvert is one of those players that front office and coach types salivate over as a “glue guy” but this time he actually brings some production to your team. With his snarl and scoring production the best way to describe him is a Brad Marchand lite.