My Dad used to wonder: “Why don’t teams just get a sumo wrestler to play goal? He’d clog up the whole net!” As an impressionable young hockey fan, I enthusiastically jumped aboard the bandwagon and clamored for my favorite team to do it.

I must’ve missed the hint of sarcasm in his voice. I also hadn’t seen the Sports Science segment on the topic which would come out many years later. Nevertheless, goalies have been getting bigger; back in 1994, when Jamie McLennan reached the NHL, he pointed out that the average height of an NHL goaltender was 5’11. Today, the average height of an NHL goaltender is over 6’2. And that’s to say nothing of the equipment. (Here’s a picture of Darren Puppa during the 1988-89 season. A season in which he was the tallest goaltender in the league. He covers, what, half the net at best? Via Grantland.) 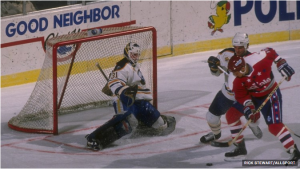 Perhaps it’s only natural that goalies have gotten bigger. But will the 2035 NHL season see the average goalie at 6’7? Do tall goalies really have such a big advantage? I asked the tallest goaltender in North America, Jason Missiaen of the Greenville Road Warriors what advantages a goalie that tall has over his peers, and whether such height has any disadvantages.

He noted that his size allows him to play deeper in the net and in particular, makes rebounds less dangerous. Because he’s deeper in the crease, he has less distance to push in order to get in position for a rebound. Most importantly, though, his 6’8 frame allows him to see over screens. Whereas goalies on the smaller end sometimes must take themselves out of position to look around screens, Missiaen (and goalies like Ben Bishop and Devan Dubnyk) have to contort their necks less often and less drastically in order to maintain visual connection with the puck.

But take a cursory glance at the high end of the list McLennan compiled:

Some good goaltenders indeed. But other than Pekka Rinne and possibly Devan Dubnyk if his “revolutionary technique” continues to pay off, no one you’d call consistently elite.

Ultimately, Missiaen said goaltending doesn’t change much whether the goalie is 5’10 or 6’8. With the advent and prevalence of the butterfly style, and because goalies are learning standardized techniques at a young age, goaltending is more technical than it’s ever been. Goalies still need to be athletic and smart, and Missiaen opined that modern goalies need to be in better physical condition than in decades past. But no matter whether a netminder is a sumo wrestler, a lean 6’8, or just an average 5’10, 175 pounds, goaltending is a predominantly technical pursuit.

Born and raised in St. Louis, Trevor is a diehard fan of all the major sports (and even the non-major ones), but particularly hockey. He plays goalie in a local hockey league and is striving to become a hockey broadcasting pioneer: the first play-by-play announcer to incorporate advanced stats into his broadcast.