What goes into this ranking? Shot attempts for percentage, offensive/defensive zone starts, goals for percentage and puck luck are the elements of this analytic power ranking. Last week’s NHL Analytics Power Rankings on Puck Drunk Love can be found here. Keep in mind that based on the 2013-14 NHL season, 13 out of 16 playoff teams ranked in the top 16 of these same analytics power rankings. 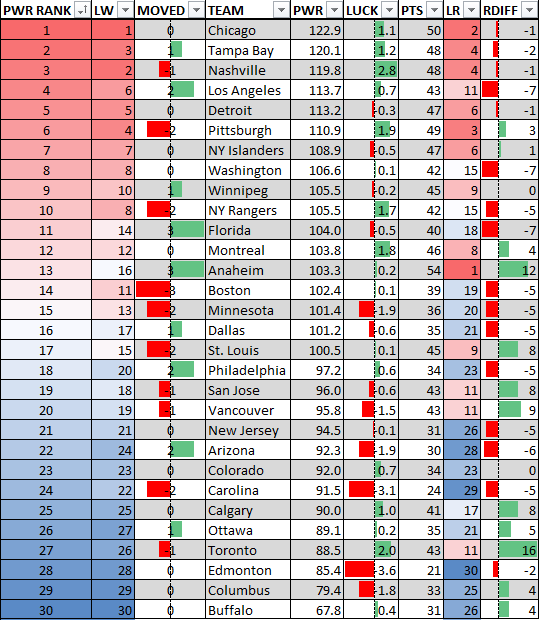 Largest change in power ranking from last week: Both the Anaheim Ducks and the Florida Panthers have moved up three spots in the rankings this week. While the Boston Bruins have dropped those same three spots.

Teams currently outside the playoffs in points but in the top 16 of the rankings: Florida Panthers, Boston Bruins, Minnesota Wild and Dallas Stars.

Teams currently in the playoffs based on points but outside of the top 16 in the rankings: St. Louis Blues, San Jose Sharks, Vancouver Canucks and Toronto Maple Leafs.

Biggest change in power ranking based on luck: The Montreal Canadiens have their position in the rankings inflated by three spots due to luck. On the flip side the Oilers, Wild and Hurricanes would all move up three spots if their luck returned to the league average.

The power ranking is based on puck possession, zone time, goals for  and luck. For the Anaheim Ducks none of these areas rank them any higher than 13th in the NHL currently. As well they are operating at about the league average in terms of luck.

Based on the analytics the Ducks are a team that should be fighting for the final playoff spot in the Western Conference. However their defense appears to be what is causing the biggest difference for them.

For the Toronto Maple Leafs their success has been based largely on the best team shooting percentage in the NHL (9.7%) and the second most potent offense behind on Tampa Bay scoring 2.7 goals for per 60 minutes. It has been well documented that the Leafs are a slave to the ups and downs of their scorers. When their scoring slumps the Leafs have no alternative to win games.