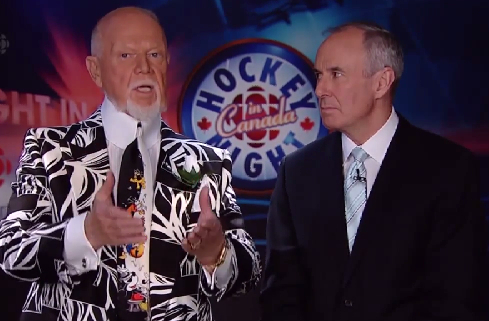 Roberto Luongo had some fun on Twitter at the expense of Eddie Lack and the Vancouver Canucks. While Vancouver was being blown out by the Dallas Stars on March 6th, Luongo jokingly started the hashtag #PrayForEddie and then stated he could have came in and "mopped up" Vancouver's embarrassing defeat.

Not everyone was laughing with Luongo. Don Cherry wasn't pleased with Luongo's comments on Twitter and told the Florida goaltender to "keep your mouth shut" during his latest installment of the Coach's Corner during Hockey Night in Canada.

It's pretty amusing that Cherry confused Luongo's comments on Twitter with texting. However, you could make a strong case that Cherry has a point. Usually his rants (which typically fall in the "get off my yard" category) are a bit out of touch and over the top, but here he makes at least a decent point on how Luongo isn't respecting his former club.

At the same time, it's obvious Luongo is a jokester. He makes fun of everyone – including himself. Cherry may be overacting (shocking!), but his stance may hold some truth. It's probably not the best time to slam your old team.

Still, Cherry once again lets his own personal bias enter the conversation, stating:

What kind of guy are you? You know how much I think of you. Let's knock if off. They're down, they're having a tough time right now.