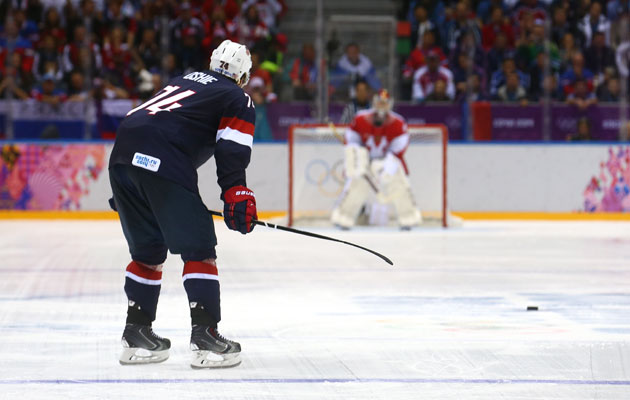 With the preliminary round over, it's time to start looking ahead to Tuesday's "Qualification Playoff round" in which we'll see the first four of the 12 teams competing sent home.

As we've done all tournament long, the Puck Drunk Love staff will attempt to make sense of it all, in advance of the final game of the group stage.

Russia's thrilling shootout victory over Slovakia, coming on the heels of their spectacular loss to "T.J. Sochi" and the Americans on Saturday, has taken them out of contention for one of the four automatic berths into the quarterfinals. They finished fifth with six points and a goal differential of three.

After wins and points, the major tiebreaker is goal differential, which has determined the matchups for all elimination games. The seedings will stay consistent throughout the tournament.

As a result of Canada's overtime victory on the strength of two goals from Drew Doughty, here are the arrangements:

– Despite injuries to Henrik Zetterberg and Daniel Sedin, Sweden emerges from the group stage as the top seed. They will await the winner of Slovenia-Austria and then most likely either Finland or Russia in the semifinal.
– Canada, with eight points, tied the Americans in points, but ultimately lost out on goal differential. They would get the third seed, and take on Switzerland or Latvia. Switzerland, as our own Steve Lepore pointed out, could be trouble for a number of the medal contenders. Through three games, the Swiss have allowed just one goal, riding a white hot Jonas Hiller to two 1-0 victories.
– The Americans earn the second seed, but arguably the toughest path to the gold medal game. If they defeat the winner of Czech Republic-Slovakia, they would then be on to the semifinals, where it is highly likely they will run into their neighbors from the north. Thanks to Canada's overtime win, both teams are on a collision course for a highly-anticipated 2010 rematch that would come one round earlier this time around.
– Finland takes the fourth seed and will likely take on the host nation, unless Mats Zuccarello can weave more of his Hobbit-like magic and orchestrate one of the biggest upsets in Olympic history.
Then again, the Russians know a thing or two about Olympic upsets. So let's not be too hasty.