As seen on the Score and in the New York Post, there are rumors that the Islanders may also adopt a black and white color scheme similar to the one worn by the Nets. It's also been rumored that the Islanders could take on a blue and white scheme, removing the iconic orange from their uniform. Curious what that might look like? Shield your eyes and we'll show you some interesting uniform concepts that might cause blindness.

The concepts below aren't new. In fact, they appeared over on Icethetics back in 2012. Keep in mind that these are just fun ideas and designs created by fans to show what a black and white Islanders uniform might look like if they ditch the blue and orange. If you're interested in what a blue and white scheme might look like, call on your imagination and replace the black in the photos below with blue. 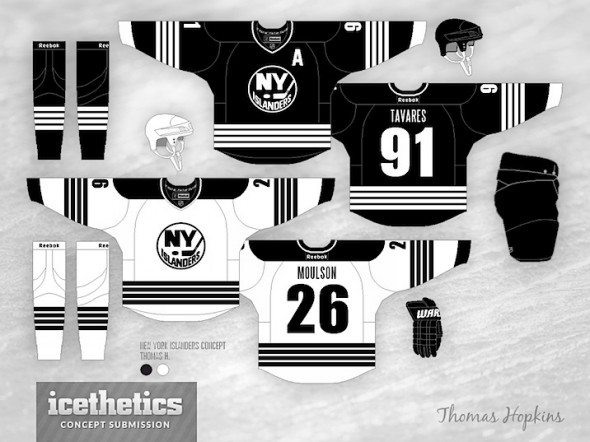 What about blue and white? Toronto would like to have a word with you. No one is saying the Islanders have perfect uniforms. In fact, they definitely could be improved, but keep them distinct and unique enough that they don't look like a copy of another team. There's no reason why the NHL should have two teams with nearly identical uniforms and there's no reason the Islanders should completely abandon their franchise's colors in favor of…well, whatever that is pictured above and below.