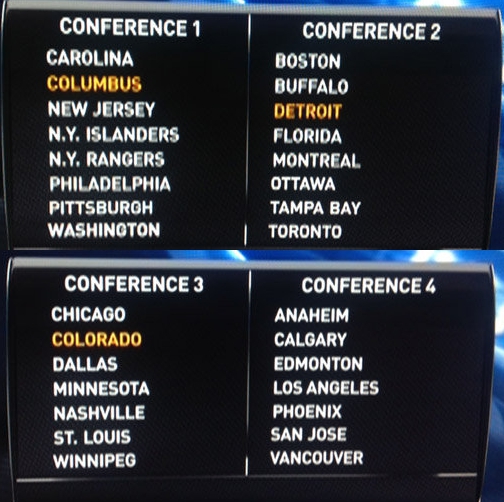 Ever since Winnipeg was awarded an NHL franchise, the hockey world has been buzzing about realignment. The Winnipeg Jets currently play in the Southeast Division and have to travel to locales such as Tampa Bay, Raleigh, and Washington, DC to play games within their division. To cut down on this travel, a deal was made prior to last season that Winnipeg would play one final season in the Southeast and then move to the Western Conference.

This sent fans, bloggers, and members of the mainstream media scrambling to come up with their own versions of realignment. Some people thought that Columbus would move to the Southeast Division and realignment would be done. Other reports stated that when Detroit moved from the Eastern Conference to the Western they were promised that when the first opportunity came about to move back east they would. After the Board of Governors agreed to a realignment plan during an in-season meeting last year, the Player’s Association swiftly voted it down, thus sending the first shot over the bow in what turned out to be a long labor negotiation.

On Saturday night during Hockey Night in Canada, CBC’s Elliotte Friedman leaked a potential realignment plan that is currently being discussed by the Board of Governors.

We'll start with the Eastern Conference: 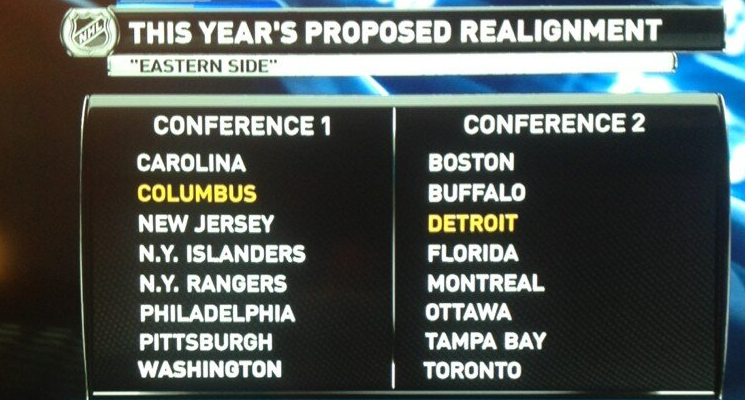 Look familiar? Well, if you weren’t a hockey fan before 1993, these are what the old Patrick and Adams Divisions looked like for the most part. What is being labeled as “Conference One” was the Patrick Division with the Devils, Rangers, Flyers, Islanders, Capitals, and Penguins. In this incarnation, the Carolina Hurricanes are added and the Columbus Blue Jackets have moved to the Eastern Conference. This logistically makes the most sense as the Blue Jackets are one the easternmost Western Conference teams.

In “Conference Two” we see some remnants of the Adams Division with Boston, Montreal, and Buffalo. The Maple Leafs were also in the Adams Division along with the Minnesota North Stars before their move after the 1980-1981 season. Another thing to notice is that Detroit also moves into the Eastern Conference. The good thing about the proposed Eastern “conferences” is that many of the rivalries are still intact, such as the Battle of Ontario and Bruins vs. Canadiens games in Conference Two. In Conference One, the Battle of New York is still in play along with the Battle of Pennsylvania and the Penguins vs Capitals rivalry that has been brewing over the last several seasons.

Well, what about the Western Conference? Here’s what the proposal looks like:

In “Conference Four”, the Smythe Division also remains virtually the same with Calgary, Edmonton, Vancouver, San Jose, and Los Angeles coming together again. Anaheim and Phoenix are also added to compete the final “conference.” Like what we see in the Eastern Conference, most of the rivalries are still intact, especially in “Conference Four” where the Battles of California and Alberta are still alive.

With these moves, there would be an imbalance between the Eastern and Western Conference. According to Friedman, a wild-card may be in the works for the teams in the Eastern Conference. This leaves the door wide open for two expansion teams to join the Western Conference and make it four eight-team “conferences.” To even add more fuel to the conspiracy fire, doesn't it look like Seattle could join "Conference Four" and an expansion team from Kansas City join "Conference Three?" It seems a bit too convenient, but the NHL has not definitively said anything about expansion.

For the sake of hockey fans everywhere, can the National Hockey League please name the “conferences” Patrick, Adams, Norris, and Smythe? After all of the nonsense that has taken place over the last calendar year, it’s the least they can do.