Toronto's Nazem Kadri had yet another big night, notching a hat trick in a 4-0 victory against the Ottawa Senators. Kadri also assisted on the team's fourth goal, giving him a total of 17 goals and 22 assists (39 points) through 36 games.

How did Don Cherry celebrate Kadri's hat trick on Hockey Night in Canada? By planting a big kiss right on Kadri's cheek, of course.

The video above is only part of the segment. Earlier, Kadri thanked Cherry for sticking with him. Cherry has been a supporter of Kadri ever since he broke into the NHL back during the 2009-10 season. Since then, Kadri has had plenty of critics, but Cherry has always been one of his biggest fans.

What was Kadri's response to the kiss? Simply, "I don't hate it."

This isn't the first time Cherry has celebrated with a smooch. As mentioned in the video with Kadri, ages ago Cherry planted one on Toronto Maple Leafs captain Doug Gilmour. On cue, Cherry leaned over and gave Kadri the Gilmour treatment, much to the delight of Maple Leafs fans.

A comparison of the two smooches, as seen on Reddit Hockey. Let's all be thankful the Kadri kiss looked way, way less awkward than the Gilmour edition. 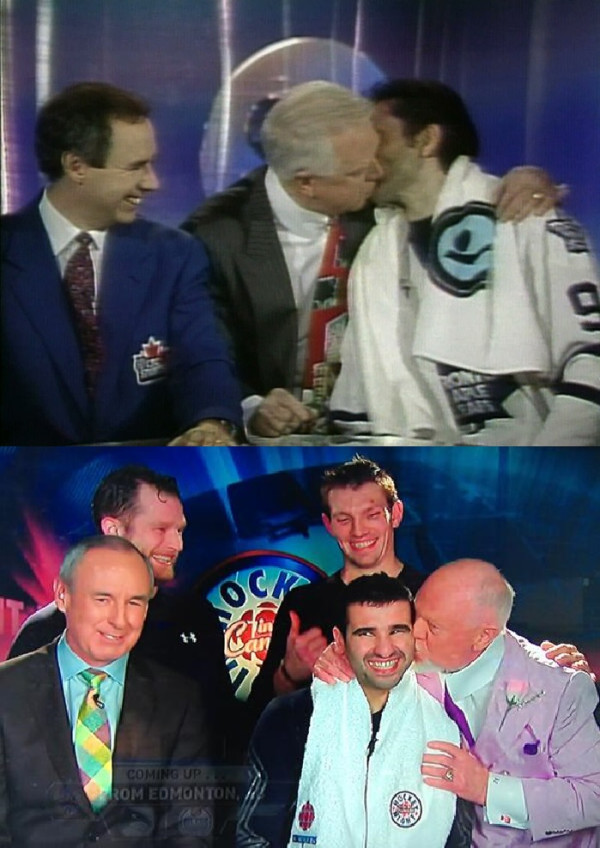