Few scribes around the country are better at chasing a story to the very end than some of the beat reporters in New York. In fact, the Big Apple is full of diligent journalists who not only possess the ability to hammer the subject of their story into submission, but to fabricate the entire story themselves.

It's an art, really. Unfortunately for rational sports fans, it seems to be an art that is neither revered nor dying any time soon.

Let us begin with the acknowledgement that no sports editor in their right mind sends their best reporter to a hockey game. Not in America. Not in November. An intelligent hockey writer would remember that most of the league's best goaltenders will start an additional 3-7 high-octane games in a two-week span in February. Does this ring a bell for anyone?

We'll never be sure if this is a directive from over their heads or sheer ignorance on their part, but that sort of forward-thinking is rarely found in the press box at The World's Most Famous Arena.

Combine that with a desperate attempt at tabloid journalism akin to a mischevious adolesecent toying with matches, and you've got the narrative heading into Monday night's tilt between the Jets and Rangers.

Cam Talbot, the suddenly capable backup for Alain Vigneault's squad, may be preparing to supplant all-world talent Henrik Lundqvist as New York's starting goaltender, according to multiple media reports. Based on what exactly? Well, um, Vigneault didn't firmly assert Lundqvist as the starter for two games in a row.

No really, that's it.

"Well, I've been here for eight years," Lundqvist told Pat Leonard of the New York Daily News. "Have I ever been happy sitting on the bench? I don't think so. But, that being said, Cam is playing really well. I see this as a great opportunity for me to get a few days to work really hard on my game and get ready for the next time they tell me to start. 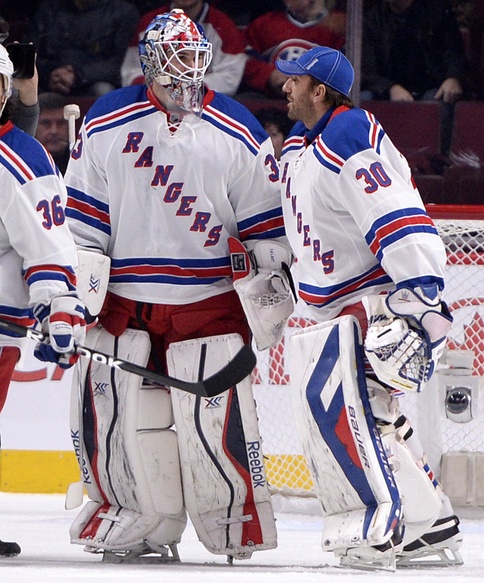 And since he had a goaltender controversy at his last stop, this must be a sure sign he's giving a 26-year-old graduate of Alabama-Huntsville a chance to take the reigns from a guy who earned a nickname associated with the highest royal standing one can attain, right?

No, of course not, says Andrew Gross of The Bergen Record. Lundqvist isn't happy. He must be given ample opportunity to retake his rightful spot between the pipes and end this madness, what with the terrifying prospect that he'll search for greener pastures come season's end. Well, no, you're wrong too.

New York hockey fans were inundated with a mass hysteria hinting at end of days for Lundqvist in Ranger blue.

Now before you go forth with your post-lunch anuerysm for the second consecutive day, let's explore some facts, shall we? As Bleacher Report's Dave Lozo pointed out, for Henrik Lundqvist–and therefore the Rangers as a whole– to be successful in the Stanley Cup Playoffs, he's got to get his rest. In a condensed schedule last season, Lundqvist played in 43 of the team's 48 games. New York flamed out spectacularly in the Eastern Conference Semifinals, falling in five games to the Boston Bruins.

In 2011-12, Lundqvist played in 62 games, and the Rangers were two games away from the Stanley Cup Final. I'll let you do the legwork on the rest of this narrative, but try to find a season in which he's played more than 62 regular season games and New York has won more than six of the 16 postseason games needed to hoist Lord Stanley's Cup. Spoiler alert: you won't.

Lundqvist has already played in 20 games despite fighting through an undisclosed injury that forced him out of the lineup for a brief stretch. He will undoubtedly be the starter for Team Sweden in Sochi, where they will be expected to compete for a medal. So you can comfortably tack on at least five to whatever number of NHL games you think Lundqvist will end up appearing in.

The goal of this New York Rangers team, just 18 months removed from the top seed in the Eastern Conference, is not simply to just make the playoffs, but rather to make a deep run once they get there. Despite what you may have read yesterday, Henrik Lundqvist will be the guy to get them there, if anyone is.

Talbot gave up four goals, none of which of the particularly dazzling variety, in a 5-2 loss on Monday against Winnipeg. Vigneault was coy on naming a starter for Thursday's game and most of the targets of this column took a deep breath, hardly clinging to their click-getting narrative. As a friend told me, today's headlines should read "Multiple Sports Journalists Suffer Injuries Falling Off Cam Talbot Bandwagon."

They're far more dedicated to the stories they gave life to than that. One sub-par performance won't knock them off the horse. But it's high time somebody dragged them through the mud a bit for being on it in the first place.