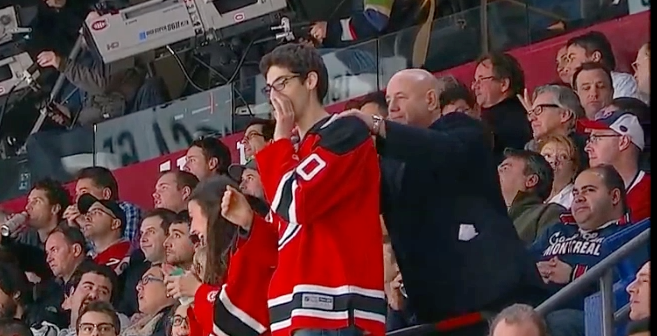 In Monday night's back and forth game between the New Jersey Devils and Montreal Canadiens, each team had a little to cheer for, such as when Michael Ryder scored in the third period to knot the game at two apiece. One of probably 10 Devils fans in the whole building decided to have the nerve to stand and cheer his team's goal – and was promptly forced back down into his seat by a Bell Centre usher.

Seriously, if you watch closely enough, you can see the usher's hands putting pressure on the guy's shoulders to get him to sit just seconds after the Devils scored. I get that he's a fan of the opposition, but having been in an arena when Habs fans invade, this guy was quaint in comparison. Let him have his fun.