If you watch hockey games on NBC Sports Network, you know that there’s always an announcer between the team benches. It usually works; the announcer can usually grab a player’s interview before the opening face-off and and can give some insight during the games that’s usually missed by the guys in the booth.

However, being that close to the action does come with some occupational hazards.

During tonight’s nationally televised game between the Chicago Blackhawks and the Los Angeles Kings, Brian Engblom was given bench duty, which is usually reserved for Pierre McGuire. In the first period, Kings center Colin Fraser threw a hard check into Hawks defenseman Michal Rozsival and this happened:

Engblom wasn’t injured as a result of the check. Even if he was, he would’ve finished the game because he’s a hockey broadcaster, dammit.

And hey, it could always be worse. He could’ve been Rangers broadcaster John Giannone and taken a puck to the face. 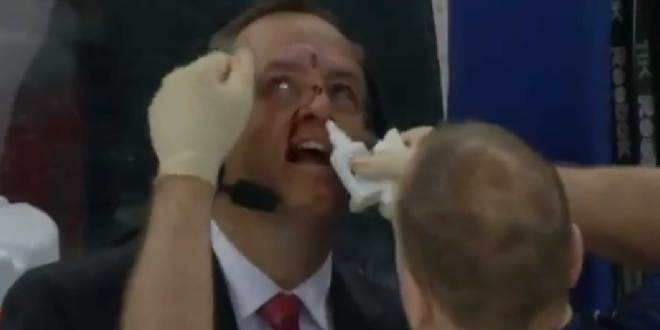