The big question heading into the abbreviated 2013 season concerned how fans would respond to the NHL lockout. Specifically, would fans return to arenas to watch their favorite teams after players and owners bickered over money for months?

With the regular season in the books, we can analyze all of the attendance figures from around the league and see if the lockout had that much of an impact. Which teams posted the best numbers? Which teams had plenty of empty seats? 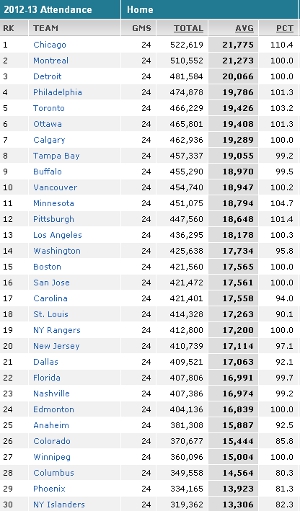 All of the numbers used in this post originate from ESPN. It's kind of ironic that the network that barely recognizes hockey as a sport has some of the best attendance statistics, but that's how it is. When it comes to attendance, take the numbers with a grain of salt. The accuracy of these reports can be difficult to prove. More on this later.

On the opposite side of the spectrum was the New York Islanders, checking in with the lowest average attendance with 13,306 a game. However, despite having the fewest average fans in attendance, in terms of capacity (82.3%) the Islanders finished 28th in the league. The Phoenix Coyotes (81.3%) and the Columbus Blue Jackets (80.3%) rounded out the bottom of the list in terms of capacity percentage.

Overall, some teams seemed to thrive with fewer games on the schedule while other teams continued struggling to get fans in the seats even with just 24 home games. It's safe to say that the lockout generally helped as the lowest average capacity in 2013 was 80.3%. In 2011-12, two teams had a lower percentage, including an ugly line of 72.5% from Phoenix.

There were a few interesting situations worth discussing.

The St. Louis Blues saw a decrease in attendance after the lockout, bringing in 17,263 fans (90.1%) in 2013 compared to 18,809 (98.2%) in 2011-12. Did Blues fans stand by their commitment to boycott the NHL after the lockout? Not quite. While the team was up for sale the old ownership group had a habit of inflating attendance figures. Sellouts were announced regularly despite large sections of empty seats. Now that the Blues have a new owner, the phony sellout reports are a thing of the past. It's situations like the one in St. Louis over the last couple years that make attendance figures almost impossible to rely on.

Phoenix. You knew we'd be talking about Phoenix here, didn't you? This time we bring positive news. The Coyotes saw a rise in attendance in 2013, bringing in an average of 13,923 fans in 2013 compared to an average of 12,420 in 2011-12. The ticket sales in Phoenix are still pretty disappointing, but you have to point out a positive when there is one.

While we're giving teams credit, give some to the Florida Panthers. Injuries destroyed Florida's lineup, causing the team to finish with the NHL's worst record. The Panthers were out of the playoff race pretty early in the year. You'd imagine ticket sales were probably pretty lousy, right? According to the figures on ESPN that's not the case. Florida's average attendance in 2013 was 16,991 (22nd in the NHL). That number might not sound very impressive, but their arena was on average 99.7% full (17th in the NHL). Not too bad, all things considered.

Look more for attendance analysis in the near future as other sites release their opinions and figures which we can then compare to ESPN's reports.