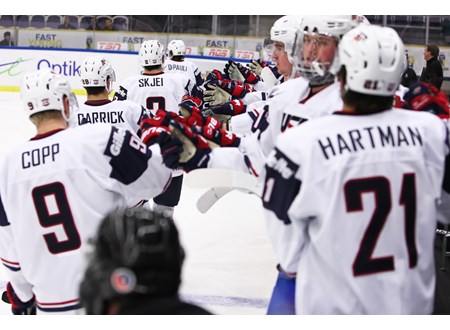 As the Americans cruised to an 8-0 win over Germany, their third consecutive victory at the 2014 World Junior Hockey Championships, it was easy to forecast a happy ending including a glorious rendition of the Star-Spangled Banner by players proudly displaying some fresh gold around their necks.

Two days ahead of their annual meeting with Canada, the United States is sitting pretty atop Group A, with nine points and a +15 goal differential. They lead the tournament with 11 power play goals, scoring six against Germany alone.

And yet, it could all come crashing down for the Americans in just a few days' time.

If anything was to be learned from watching their neighbors to the north fall to the Czech Republic in a shootout on Saturday, it's that nothing is certain in a short tournament. While they sit five points clear of Canada in Group A, this year's edition of that rivalry is as crucial as ever.

With the new format for the knockout round this year, eliminating a bye for the group winners, the top spot becomes all the more desirable to avoid a less favorable matchup in the quarterfinals. Should the Canadians reel off regulation wins over Slovakia on Monday and the Americans on Tuesday, they would claim the top spot in Group A, pushing the US to second.

While taking second in this group shouldn't be seen as a failure by any stretch, it makes for a significantly harder road to a fourth medal in the last five years. Rather than likely taking on the winner of Monday's tilt between Norway and Switzerland, the Americans would essentially be tasked with beating two of Finland, Sweden and Russia to earn a spot in the Gold Medal Game.

Even one point against Canada would get the job done. But it won't come easy. Those suggesting that Canada's 5-4 shootout loss will serve as a wakeup call for their collection of former and future first-round picks aren't necessarily wrong, but a lack of intensity when those teams meet is never an issue.

Canada's squad, teeming with high-end talent, should not and will not be taken lightly by Don Lucia's group. Unbeaten, and largely untested through three games, the Americans will be in for an entirely new challenge on New Year's Eve. A loss could serve as a frightful reminder of the peaks and valleys of the World Junior Championships.