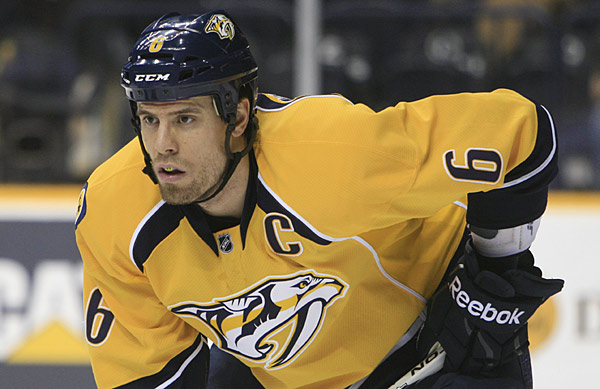 Under the cover of night is about the time one would expect an offer sheet deal to go down. No one likes to discuss offer sheets in the NHL. They’re often seen as poaching players, tempting them away from their rightful teams. General managers tend to stay away from them because it “paints them in a bad light,” despite the fact that it’s a perfectly legal and fine thing to do according to the CBA and every other owner and general manager in the league.

Consider Shea Weber poached. The Philadelphia Flyers, again without the services of Chris Pronger for the foreseeable future, need a star defenseman. Shea Weber finished a year of a deal that paid him $7,500,000 — the salary decided not by the Nashville Predators, but by an arbitrator. Weber is now a RFA, which gives the Preds first negotiating rights to him. Would they sign him to a long term deal? Would they trade him in fear of him walking away for nothing? Or — and no one expected this — would another team swoop in and offer up a deal too good to pass up?

The latter happened. The Flyers offered Weber a whopping fourteen year deal at $100 million. How could the Predators’ captain turn that down? Loyalty’s great until you have that many zeroes looking at you from a sheet of paper. The Predators have a week to match. If they don’t, Philadelpha has to compensate them to the tune of four first-round draft picks. That, plus the $100 million price tag, seems a steep price to pay for a defenseman — but it’s Shea Weber. Weber’s the most in-demand defenseman who was even halfway on the market. Once Ryan Suter signed with the Minnesota Wild, all eyes shifted to Weber, who seemed dumbfounded that his defensive partner was gone.

The Predators were a defensively solid team with Suter and Weber in place. What happens to their chances in the Central Division — and what happens to Pekka Rinne’s stellar numbers — without the duo? With their departure, the lack of goaltending in Chicago, the aging and weakening of Detroit’s defensive corps, and the Columbus Blue Jackets generally not being very good, well, could it be that the Central wouldn’t be the best division in the Western Conference (and some say the NHL)? What a shift in dominance one guy leaving would make.

Nashville’s fans are, I’m sure, praying that David Poille matches that offer. But in days where it’s been shown GMs in other sports will let stars walk, there is no guarantee.