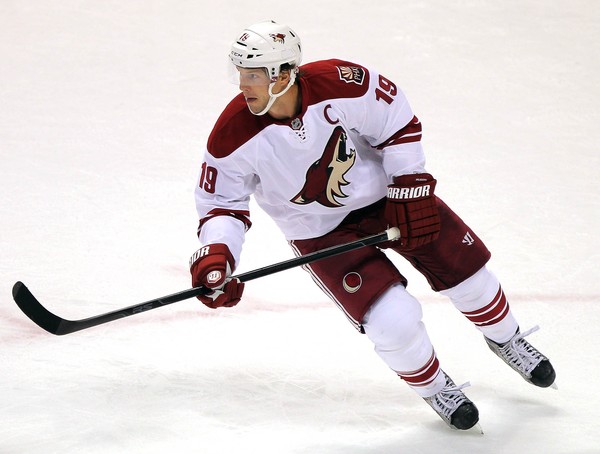 Shane Doan has always been more than vocal about the fact that he wants to stay put with the franchise that drafted him. The last member of the Coyotes who also played for the Winnipeg Jets, Doan is the team’s captain and centering force in the locker room. He’s beloved by the fans, and he wants to stay in the city he calls home. He’s lived there for sixteen years, so the thought of up and leaving the only team you’ve ever played for and leaving where you’ve rooted your family would be a tough thing for anyone to do.

The blow to the Coyotes’ collective psyche would also be hard to take. They’ve lost team leader Ray Whitney to free agency and the Dallas Stars. You factor in losing the captain during such a tumultuous time in the desert and the blow to the franchise and the fans’ confidence would be tough to rationalize.

It’s small comfort that Doan wants to stay in Phoenix and has made it clear that he will put off until the last second any deals that would involve him leaving the team. Unfortunately, legal wrangling over the team’s sale to Greg Jamison is casting a haze over the team’s future. No one knows if the Coyotes will be in the desert after this season. If you remember the Ilya Kovalchuk contract issues with the Atlanta Thrashers two seasons ago, part of the issue with Kovalchuk staying in Atlanta was the uncertainty of the team’s future. No one wants to sign a long term deal expecting to be in a city that you and your family enjoy only to be uprooted somewhere else.

Doan does have the option to sign just a one year deal to wait and see, but he doesn’t want that. While he wants to stay with the Coyotes, he also wants to know that he doesn’t have to go through the rigmarole of signing another deal next year. He wants to be paid long-term for his services, and considering how long he’s been in the league, that’s more than his right.

Doan’s a talented player, a leader, and thirty five years old. Teams want him for that veteran leadership as well as his skill, which is why it should come as no surprise many teams have offers in to Doan’s agent. The latest rumor is that Doan has been offered a very large, four year deal by an Eastern Conference team. How large? Four years is a fair term, but the annual salary would average around $7.5 million a season. Keep in mind this is for someone in the twilight of their career, or who will be.

What Eastern Conference team would do that? Doan has said that if he signs somewhere other than Phoenix that he would prefer a Western Conference team close to his family. It has to be a team with money to burn and a need somewhere at forward. Is this a wise offer for Doan? Jonathan Willis at NHLNumbers.com falls on the “no” side of the arguement, at least for teams on the higher end of committed payroll, and does a pretty good job of explaining just why. You could expect Doan to wind up with $4.5 to $5 million a season in this off-season’s geezer bonanza. But $7.5 million? Only teams who aren’t spending much would throw cash at Doan, and those are probably teams that are a few steps away from the playoffs. Will Doan play for a team with less playoff success than his current one for more money? That seems unlikely.